FOX Renews ‘Grimsburg’ for Season 2 Ahead of Season 1 Premiere

John Hamm to EP and star in the new animated comedy series about Marvin Flute, a misanthropic detective trying to redeem himself; produced by Bento Box Entertainment, the show debuts next year on FOX. 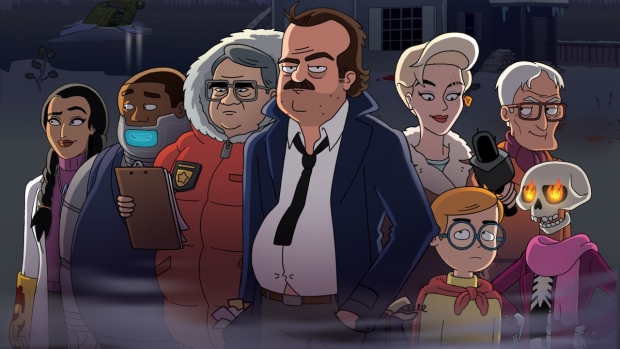 FOX Entertainment’s upcoming animated comedy Grimsburg, starring and executive-produced by Emmy Award winner Jon Hamm (Mad Men, Confess, Fletch), has been picked up for Season 2 ahead of its 2023 debut. FOX Entertainment’s president of entertainment, Michael Thorn, made the announcement.

“Grimsburg is yet another clear example of our strong commitment to, and intense focus on, upholding the high bar of standards any show must exceed in order to reside under the Animation Domination banner,” said Thorn. “Of course, having Jon Hamm’s talent and star power front and center is a great place to start. Equally important, everything we’re seeing with Grimsburg – from the very first scripts and show bible to animatics and preliminary cuts – makes us believe we have a winner on our hands that beautifully complements our animation brand.”

Wholly owned by FOX Entertainment and produced by FOX’s Emmy-winning animation studio, Bento Box Entertainment, Grimsburg centers around Marvin Flute (Hamm), who may be the greatest detective ever to catch a cannibal clown or correctly identify a mid-century modern armoire. But there’s one mystery he still can’t crack —himself. To do that, he must return to Grimsburg, a town where everyone has a secret or three, and redeem himself in the eyes of his fellow detectives, his ferocious ex-wife, and his lovably unstable son.

Grimsburg premieres in 2023, joining FOX Entertainment’s other all-new animated comedy, Krapopolis, which last week was also picked up for a second season prior to its first season premiere. Both programs will be introduced to international program buyers this week at MIPCOM CANNES by FOX’s recently formed content sales unit, FOX Entertainment Global.