The all-new animated comedy about a dysfunctional family of ancient Greek humans, gods, and monsters won’t air until 2023, but that didn’t keep the network from ordering a second season. 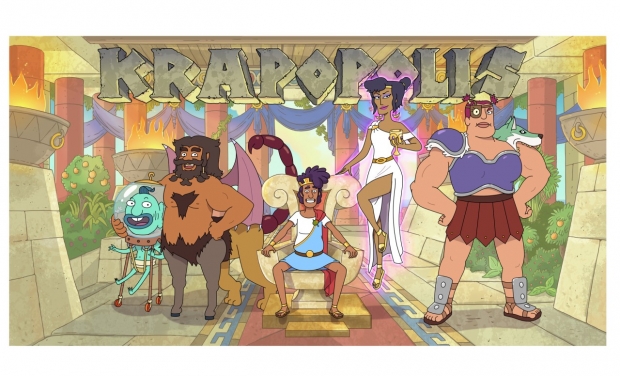 The series is set in mythical ancient Greece and tells the story of a dysfunctional family of humans, gods, and monsters that try their hand at running the world’s first cities – without trying to kill each other. The series features the voices of Emmy Award winner Hannah Waddingham (Ted Lasso); Richard Ayoade (The IT Crowd); Matt Berry (What We Do in The Shadows); Pam Murphy (Mapleworth Murders); and Duncan Trussell (The Midnight Gospel).

“As you can imagine, anything Dan Harmon does is unflinchingly irreverent and filled with his signature, bold characters; and these early episodes of Krapopolis far surpass even our highest expectations,” said Thorn. “While we continue to evolve FOX’s animation brand, it’s a true delight watching Dan and his team work their magic on Krapopolis.  But it’s an even bigger thrill to be so confident in this special project to be able to reward it with an early renewal.”

Krapopolis is an outgrowth of Harmon’s direct animation deal with FOX Entertainment. In the series, Ayoade voices “Tyrannis,” the mortal son of a goddess. He’s the benevolent King of Krapopolis trying to make do in a city that lives up to its name. Waddingham plays “Deliria,” Tyrannis’ mother, goddess of self-destruction and questionable choices. Within her extended Olympian family – forged in patricide and infidelity – she’s known as the trashy one. Berry is “Shlub,” Tyrannis’ father, a mantitaur (half centaur [horse + human], half manticore [lion + human + scorpion]). He is oversexed and underemployed, claims to be an artist, and has literally never paid for anything, in any sense of that word, for his entire life. Murphy voices “Stupendous,” Tyrannis’ half-sister, daughter of Deliria, and a cyclops. Trussell plays “Hippocampus,” Tyrannis’ half-brother, offspring of Shlub and a mermaid, and, obviously, a hot mess, biologically speaking.