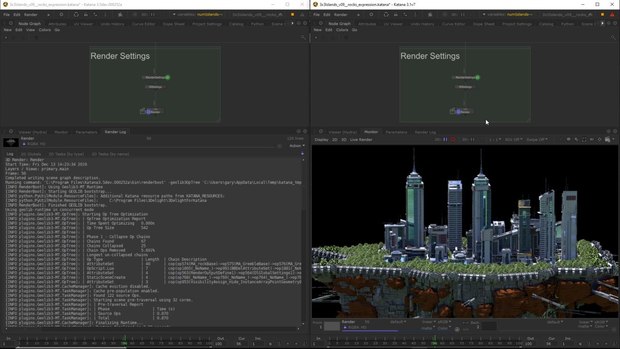 LONDON -- Foundry, the leading developer of creative software for the Media and Entertainment and Digital Design industries, has just released Katana 3.5.

Katana 3.5 has a newly rebuilt core engine making it quicker to perform key operations so artists can iterate faster. A new option to render images directly to the viewer means artists now interact directly with their work. A Foundry-supported, render agnostic USD plugin allows studios to build powerful USD pipelines with less development effort. The source code will be open sourced shortly after the release of Katana 3.5.

Highlights of Katana 3.5 include: According to Jordan Thistlewood, Director of Product – Pre-production, LookDev & Lighting, Foundry, “Katana 3.5’s mission is to empower artists tasked with the most demanding look development and lighting challenges in the industry, whether from complexity or volume of work. To do so we’ve drastically improved core performance with the help of Intel, making the time to first pixel plummet. We’ve offered a whole new way to interact with renders with the Monitor Layer and we’ve continually improved many other tools. But Katana is a tool that doesn’t stand alone - the ecosystem around it is very important to us and our clients.  Therefore, we are open-sourcing USD plugins for Katana that are render-agnostic. We’re also close to open sourcing a Shotgun plugin so our clients don’t have to build it themselves. This holistic approach to Katana and the teams that use it is fundamental to our continuous product improvements at Foundry.”

“Foundry and Intel collaborated to unleash impressive performance gains in the latest Katana 3.5 release. This is of real value for filmmakers, allowing them to finesse and render scenes at amazing speed,” Roger Chandler, VP/GM of Visual Computing Software, Intel, added.

To find out more about Intel and Foundry’s collaboration on Katana 3.5 read Intel’s White Paper here. The full list of features for Katana 3.5 can be found here.