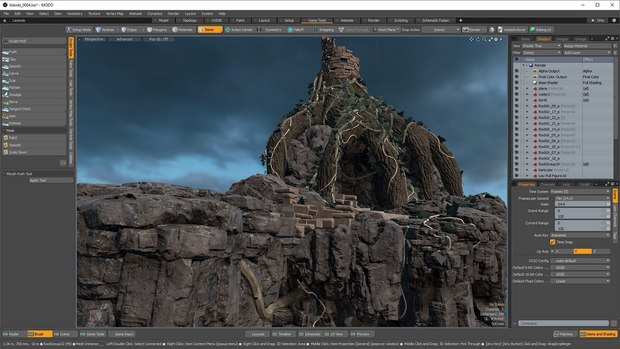 LONDON -- Creative software developer, The Foundry, has announced the introduction of a new workflow that is designed to enable greater creative exploration, with the launch of MODO 10.1. As part of The Foundry’s continued focus on empowering artists to bring their ideas to life faster and more easily it has introduced a new procedural modeling system to MODO 10.1 that works side by side with MODO’s direct modeling toolset.

The new toolset enables artists to iterate more freely with the ability to manipulate modeling operations at any time in a flexible layer stack; create infinite variations using procedural operations that can be driven by textures, falloffs or dynamically changing inputs; and easily accommodate change requirements with the ability to edit selections and swap out input meshes after the fact. New curve tools, constraints, deformers, and enhancements to the MeshFusion toolset complete the MODO 10.1 modeling updates.

Andy Whitmore, chief product officer commented, “The Foundry develops its products in partnership with its customers to ensure we are enabling them to do their best work. With the development of MODO 10.1 we focused on our customers’ needs for increased flexibility, building new features that allow artists to easily create multiple variations and iterations. The introduction of a new procedural modeling framework that works alongside MODO’s direct modeling system and the award-winning MeshFusion Boolean tools makes it unique in the marketplace, and one of the most advanced 3D modeling applications available.”

MODO 10.1 is now shipping and is the second installment of three in the MODO 10 Series. Customers purchasing the MODO 10 Series will receive all three installments as they become available, including the recently released MODO 10.0, which offers enhanced workflows for creating real-time content for games, or for other immersive interactive experiences like virtual reality.