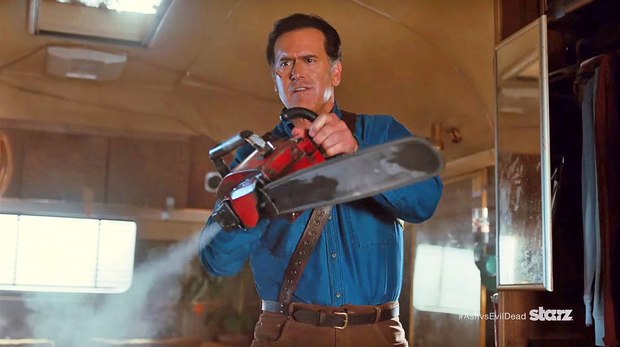 DaVinci Resolve is the long-awaited follow-up to the classic horror film The Evil Dead, executive produced by Sam Raimi, Rob Tapert, and Bruce Campbell, the original filmmakers and Craig DiGregorio, executive producer. The show premiered, on Starz Network, Halloween night to legions of fans worldwide, the new show has been one of the most anticipated premieres of 2015.

Ash vs Evil Dead follows Ash (Bruce Campbell), who has spent the past 30 years avoiding responsibility, maturity and the terrors of the Evil Dead. When a Deadite plague threatens to destroy all of mankind, Ash is finally forced to face his demons, personal and literal.  Destiny, it turns out, has no plans to release the unlikely hero from its evil grip.

The Evil Dead films have become famous for their horror, humor and distinct visual styles. FotoKem graded the pilot at their Burbank facility using DaVinci Resolve Advanced Control Surface. FotoKem colorist Alastor Arnold, who also was the colorist and worked with Raimi on the remastering of the original The Evil Dead, headed the grading work.

“As with most pilots, we were basically setting the look of the series. So, for example, it was important to establish the look and perspective of the “Evil Force” from the first time it’s on the screen. Although the look of the show is warm, Raimi and (film editor of the first episode) Bob Murawski wanted that metaphysical presence to have a very high contrast, desaturated look that juxtaposed the rest of the show. We spent a lot of time perfecting that visual element, which was devised entirely in the DI and will carry through the rest of the episodes,” said Arnold.

To follow the unique look of the classic films, as well as maintain the appropriate dark and foreboding atmosphere of a horror film, Arnold relied on a wide number of DaVinci Resolve’s color correction features, including its Power Windows, 3D tracking and noise reduction.

“Raimi was going for a very filmic, warm and saturated look. Both Raimi and Murawski are big film fans. All of the ‘Evil Dead’ films were shot on and distributed on film, and they wanted to stay true to that feel for the series,” added Arnold. “Sam likes to apply windows and shapes in intentionally dark scenes, with an emphasis on brightening the actors’ eyes and faces. Resolve’s Power Windows and associated tracker allowed us to easily and quickly accomplish these needs.”

The pilot was shot primarily in RAW, and is a VFX intensive show, with dozens of VFX heavy scenes throughout.

“The project was unique because it was a Resolve-centric workflow from beginning to end. For a TV show with heavy VFX, we are able to manage the multiple matte channels in Resolve easily. It was more like doing a mini-movie versus a TV show,” continued Arnold. “Resolve handles RAW workflows very well, requiring no transcoding or supplementary steps prior to color correction. And to allow more control in the DI, all of the VFX shots were provided with EXRs with multiple matte channels, which allowed us to have very finite control of how and what to grade in the frame. Resolve’s ability to easily manage and manipulate multiple matte channels was very important in choosing it as the grading platform for this pilot.”

As part of the post production workflow for the pilot, Arnold used DaVinci Resolve’s extensive editing features for online editing for the entire show, creating a seamless finishing workflow.

“Because Resolve includes editing tools,” concludes Arnold, “We were able to keep the entire project on one platform. When you work with a director like Sam Raimi, you want a tool that’s fast and that you can rely on. Resolve works seamlessly and naturally, and I know I’ll be able to make changes and show different looks in real time, and work quickly.”