Detailed look at the making of the three-minute ‘Fortnite’ trailer assembled, lit, color corrected and rendered in Unreal Engine will be presented at the Unreal Engine User Group meeting during SIGGRAPH 2017. 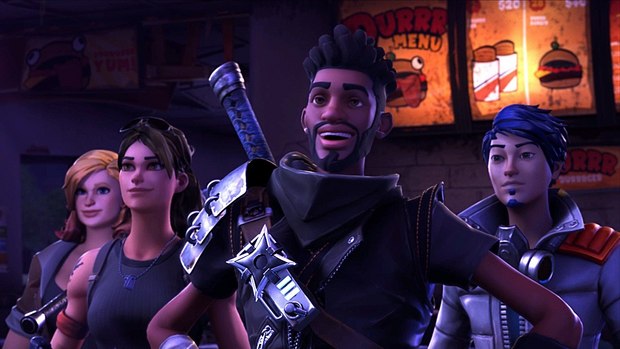 CARY, NC -- Epic Games recently released the cinematic launch trailer for its highly anticipated action building videogame, Fortnite. The three-minute trailer features a detailed cityscape, complex characters and explosive visual effects -- more than 130 individual shots -- and was entirely assembled, lit, color corrected and rendered in Unreal Engine. A detailed look at the making of this trailer will be presented at the Unreal Engine User Group meeting during SIGGRAPH 2017 in downtown Los Angeles at 4:30PM on July 31.

The trailer, A Hard Day’s Nite, introduces Fortnite’s heroes as they sneak into an abandoned burger joint to scavenge for loot, and discover an innocent mother and young daughter hiding out from monsters. The heroes fortify the crumbling structure as a mob of monsters begins to claw through the windows, and an epic battle ensues. Everyone gets into the supercharged action -- and just as the coast clears, a new bigger mega monster comes in; thanks to crafty teamwork, the heroes still manage to save the day.

What makes this project unique is that while development simulated a traditional production pipeline in many ways, the entire trailer was lit, constructed and rendered in Unreal Engine to enable a truly real-time experience. Once the models, rigging and animation assets were in Unreal, scenes were lit in real time at full resolution as VFX and particle systems were added. Everything was integrated through Sequencer, Unreal’s native, non-linear cinematic editor.

The making of the Fortnite trailer leveraged the full range of the latest advanced content creation features available in Unreal Engine 4.16: “While we’re clearly not going for photorealism in this piece, we did want to breathe more life and believability into the characters. By doing real time deformations in Unreal Engine, we had more control over facial expressions and could fine tune those performances interactively by utilizing Alembic caching,” Michael Gay, Director of Cinematic Production, Epic Games concluded.

A gameplay trailer of Fortnite illustrates how players band together to build, scavenge and loot extravagant forts, weapons and traps, battling strange monsters and defending allies along the way. The game, currently in beta, will be available in early access on July 25 for PlayStation 4, PlayStation 4 Pro, Xbox One, PC and Mac.

Register for the Unreal Engine User Group meeting on July 31 in Los Angeles at makeitunreal.eventbrite.com.