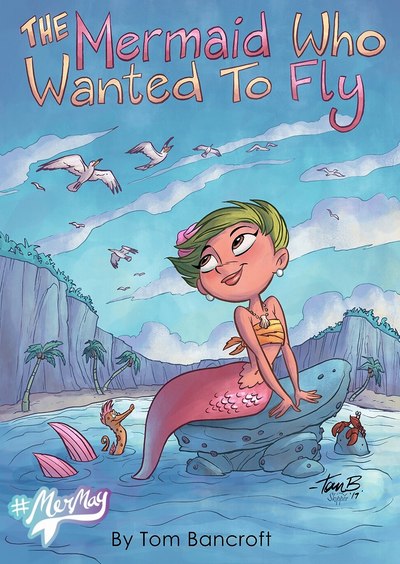 Bancroft has created the project with the aid of DC Comic’s colorist Jeremiah Skipper, and will unveil text and art following the story of Lani, the mermaid, each day during the month of May. The coined term “MerMay“ event will parallel with one of Bancroft’s most popular artistic challenges. The charge will prompt and encourage fans, and the general public, to navigate through their own expressions and submit their creativity with new drawing prompts posted each day.

Tom Bancroft’s work has been featured in countless highly acclaimed films, including Aladdin, Beauty and the Beast, The Lion King, and Mulan among many others. Additionally, he has created characters and artwork for clients ranging from Walt Disney, to Hasbro, VeggieTales, DC Comics, DreamWorks, Random House, Marvel and is currently the developer and artist in residence for Lipscomb University’s new Animation Program. Having been invited as a keynote speaker and instructor at numerous tradeshows, art schools, and conferences, additionally Tom co-hosts a popular animation podcast on iTunes alongside his highly-esteemed twin brother, Tony Bancroft – known as The Bancroft Brothers.

After taking part in a myriad amount of projects and experiences, Bancroft is setting out to bring an accessible and modern twist to the art of storytelling and animation to a vast global platform. “I want to provide multiple channels of opportunity for anyone who wants to dream, for anyone aspiring to create through the visual arts or for those of us who just want to be inspired and entertained,” he said of the new venture.

“When I was young and studying at CalArts, everyone had to follow a detailed path for their work to be seen by any major film studio, book publisher or really…anyone; but with the advent of the internet, we all have a movie studio, publishing company and distribution system in our pockets!” Bancroft continued. “It’s my goal to continue generating avenues for creative inspiration and provide good, clean entertainment through fun stories; I want to enable and allow everyone to know they can create without waiting for anyone’s permission.”