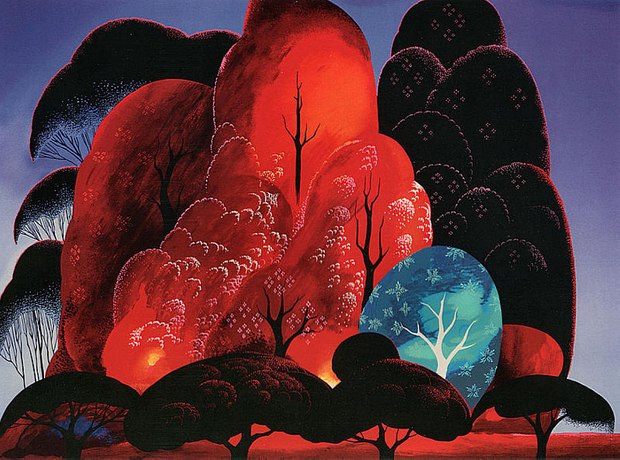 On view at Forest Lawn Museum, “Eyvind Earle: An Exhibit of a Disney Legend“ features original oil paintings, watercolors, drawings and sketches, many never seen before on public display, through January 1, 2017.

Earle’s work, found in the personal collections of filmmakers Guillermo del Toro and Peter Jackson, writer Dean Koontz and others, is recognized for its truly original perception of landscape that simultaneously captured the grandeur and simplicity of the American countryside. His work portrayed the natural landscape’s atmosphere, color and lighting, and conveyed, through suggestions of distance, landmass and mood, a magical, awe-inspiring ghostliness of the elements. This exhibition celebrates Earle as one of the most innovative landscape masters of his time -- inspiring a new generation of artists working today. To this day, much of Earle’s work remains unclassifiable -- neither contemporary nor classic -- with perhaps one of the more predominant features of his master landscapes being large geometric forms, employed to their fullest to bring a supernatural aura to everything from hills to distant waves. Earle’s unique technique has been praised for its delicate mood as much as its meticulous attention to detail.

Presented in association with Smithsonian Magazine, the Forest Lawn Museum hosted a VIP reception for the exhibit on September 24, in celebration of Museum Day Live.