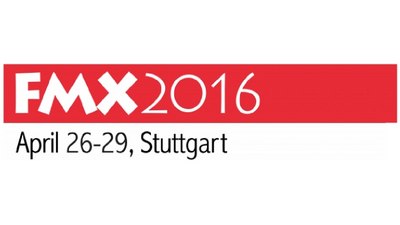 LUDWIGSBURG, GERMANY -- FMX 2016, Europe’s most influential gathering of the effects, animation, virtual reality, games and transmedia communities, saw a very successful 21st edition: from April 26-29, FMX assembled 3,500 attendees -- a new all-time high. FMX made full use of the Haus der Wirtschaft, where all conference locations and exhibition floors received a substantial number of visitors well into the evening hours even on Friday. The specialist audience, FMX partners and 120 journalists from around the world came together to discuss and explore the future of digital entertainment, both in theory and practice.

Taking place in the Haus der Wirtschaft and the Gloria Cinema in Stuttgart, as well as the Caligari Cinema in Ludwigsburg, FMX welcomed attendees from as much as 52 countries, including Antigua and Barbuda, Malaysia and Singapur. Together, they dedicated themselves to this year’s theme of “Blending Realities,” examining the differing working and production realities inside the digital entertainment industry and the implications and increasing importance of those realities for one’s own work. FMX attendees -- two-thirds professionals and one-third students -- flocked to presentations on ground-breaking work in VFX, animation and games and laid hands on cutting-edge filmmaking tools for virtual reality and virtual production during various Forum activities in Workshops and Masterclasses. They learned about the latest trends in software, hardware and further information technology services at the Marketplace, showcased their reels at the Recruiting Hub and familiarized themselves with the alumni and projects from international film and media schools on the School Campus. All in all, 260 speakers and forum partners shared their insights in about 300 different event formats.

“The goals for FMX 2016 were ambitious,” comments FMX Executive Director Jean-Michel Blottière. “The creation of a virtual production stage, the real-time production of VR content, the blend of real and virtual actors, on stage and in real time.... I dare say we succeeded with the help of some of the most brilliant minds on this planet -- and the friendly support of powerful partners -- to create a very exciting moment of collective intelligence. I come out of FMX reenergized. Thank you all and see you in 2017!”

“FMX 2016 felt like a cordial and a warm event, and it did justice to its title ‘Blending Realities,’” adds FMX Conference Chair Prof. Andreas Hykade. “The different communities came together, exchanged their ideas and were able to give a new, vibrant impetus for the future of digital entertainment.”

Highlights from the FMX 2016 program

Two-time Oscar winner Rob Legato (Titanic, Hugo) provided yet unheard insights into the VFX work of The Jungle Book in the Koenig-Karl-Halle. As much as ten case studies illuminated films like the VFX-Oscar winner Ex Machina as well as Captain America: Winter Soldier and the latest Star Wars installment: The Force Awakens - and all of them were highly sought after. The ILM team of The Force Awakens shared its moving experiences with an exhilarated audience in the Koenig-Karl Halle, the Foyer Koenig-Karl and the Meidinger Saal.

Animation covered the big audience favorites as well as the independent scene. Two talks delivered insights into Pixar’s Inside Out, which scooped the Oscar for best animation this year. Further presentations spotlighted Zootopia -- including a Walt Disney panel discussion -- Peanuts, The Little Prince and independent works from artists such as two-time Emmy winner Nick Cross (Cartoon Network) who spoke in the “Wild & Strange” track.

VR experiences for movies such as The Martian, The Walk and The Avengers as well as presentations on Epic’s Bullet Train or Crytek’s The Climb were part of an extended VR focus. Jan Pinkava (Google Spotlight Stories), who developed the original idea for the Oscar-winning film Ratatouille, and Bernhard Haux (Oculus Story Studio) were among the countless professionals who contributed to one of the many sessions on virtual reality and its implications for storytelling. Further experts included Richard Marks (Sony Computer Entertainment) or Guido Voltolina (Nokia Technologies). David Morin’s “Virtual Reality for Production” series of presentations dug into the Virtual Production for films such as The Jungle Book, The Martian and Gods of Egypt.

The insights into the game Hellblade were illustrated with an impressive motion capture live-performance of an actress that was tracked on stage in real time - with the final image appearing on the big screen as she performed. Bestselling crowd-pleasers such as Paragon or Halo 5 were dissected. The “Games for Change” track featured accounts of VR-storytelling for journalism as well as Chris O’Reilly’s immersive and interactive work for Nexus that includes example gaming experiences for children’s hospitals.

Nami Strack curated the first track on sound at FMX, emphasizing sound for TV, VR experiences and sound formats such as Dolby Atmos and hosting presentations by speakers such as MaryJo Lang (Warner Bros.). Christophe Hery’s (Pixar) track on “The Art and Science of Digital Cinematography” brought lighters and renderers face to face with cinematographers, and featured heavyweights such as MPC, Pixar and Dneg. Also on the program: a look behind the scenes of six-time Oscar winner Mad Max. Paul Debevec put an emphasis on light field technology with a track on “Computational Cinematography.” The focus on business comprised, among others, “Studio Insights” that were curated by Dave Gougé (Weta Digital) and delivered by leading executives such as Shawn Walsh (Image Engine).