Returning in April as ‘climate-friendly’ certified, the event will feature discussions on sustainability in film and media production; programming announcements include a look at animated shorts ‘A Flammable Planet’ and ‘Can’t Negotiate the Melting Point of Ice,’ and advancements of AI Rotoscoping. 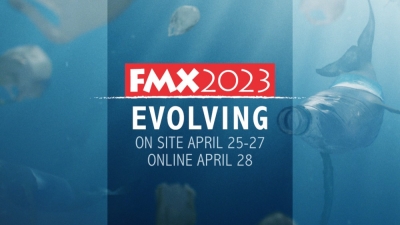 FMX 2023 returns this year with an official “climate-friendly” designation, running on site April 25-28 with an exclusive online day, April 28. Fittingly the trailer for this year’s event is The Beauty, which discusses sustainability as a core topic – watch it below.

FMX is receiving certification as a climate-friendly event for the first time from the KSS Klimaschutzstiftung Baden-Wuerttemberg (KSS Climate Protection Foundation). The KSS supports the state of Baden-Wuerttemberg on its path to climate neutrality. The event will also include discussions on sustainability in film and media production.

The official trailer The Beauty sends viewers on a “poetic journey through a fascinating underwater world where plastic waste and nature have become one.” The animated short is a project by alums of the Filmakademie’s Animationsinstitut, including Pascal Schelbli (Director), Marc Angele (VFX Supervisor), Noel Winzen (Animation), Tina Vest and Aleksandra Todorovic (Producers).

For a short moment, worries and guilt dissolve between eerily beautiful coral reefs and the mysterious depths of the ocean – watch the trailer:

Program announcements include the stop-motion animated films A Flammable Planet and Can’t Negotiate the Melting Point of Ice for WWF (NOMINT) and the streaming series The World According to Jeff Goldblum (Alchemy), as well as the latest developments in the field of AI Rotoscoping (Kognat).

Yannis Konstantinidis (NOMINT) will talk about taming the elements to create a series of films for WWF to rally awareness and action around major climate-related issues.

The World According to Jeff Goldblum

London-based motion design studio, Alchemy partners Pete Williams and Andrew Milner will share their experiences working on the show, creating engaging animation sequences – using various styles to suit the subject of each episode. In addition, they will discuss their involvement from the early pitching and execution of concepts to how a team of animators spent months putting themselves inside the mind of the inimitable Jeff Goldblum.

Kognat founder Sam Hodge will discuss the progress made in the field of machine learning field and how large datasets have allowed for the automation of processes previously considered impossible for machines to predict. He will share his discovery process in bringing a deep learning solution from academic publications to a turnkey product. In addition, it will reveal how he repeats this process of distribution of machine learning solutions in a number of domains, including media and entertainment.