Running May 4-6, the online even has announced additional talks and highlights, including ‘From 2D to 3D: The Craft of Tom & Jerry,’ more ‘Concept Art Track’ speakers, and a panel by the Animation Media Cluster Region Stuttgart. 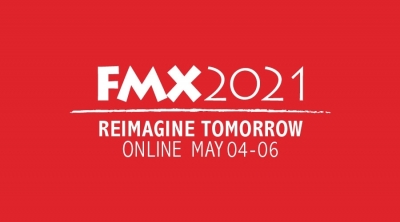 FMX 2021 has announced new program highlights for the upcoming event running May 4-6.

Tom & Jerry (Warner Bros., 2021) sees two of the world’s most famous cartoon characters tumbling into our own 3D world. Working across 1,165 shots, some 600 VFX artists and 100 animators were presented with the challenge of staying true to the classic 2D Hanna-Barbera characters the world knows and loves while enabling them to live, breathe and brawl alongside a human cast.

The Concept Art track at FMX 2021 curated by Patrick Hanenberger (production designer & world builder, The Neuland) presents a series of speakers including concept designers who use their illustration skills to convey complex ideas in a powerful way:

FMX 2021 kicks off with a live opening broadcast from The Studio, May 4 at 10:30 am CET with an introduction of the theme “Reimagine tomorrow.” There will also be a short overview of what you can be expected during the event.

The opening will be presented by former MTV Europe VJ, moderator and journalist Kimsy von Reischach, who will also be leading the studio program during the FMX 2021 days. The program of The Studio will focus on Baden-Wuerttemberg as Germany's top location for animation and visual effects by highlighting the work of some of its most important studios and talents:

A panel by Animation Media Cluster Region Stuttgart (AMCRS) illustrates the advantages, synergies, and success stories of the network. Other speakers include animation film directors and artists Angela Steffen and Julia Ocker - creators of the award-winning children's series for Studio Film Bilder. They will provide insights into their experiences in creating series projects – from initial planning to marketing strategies. Furthermore, the AMCRS panel will look at educational challenges in a rapidly changing media world.

Other highlights of the studio program include a presentation on the VFX on Star Trek: Discovery by Pixomondo and Mackevision, and a panel discussion hosted by the VES Chapter Germany. Jan Adamczyk and Nina Pries will be joined by VES board of directors’ members Arnon Manor and Neishaw Ali from the USA. Other panel guests will be 1st vice chair of the Visual Effects Society, Emma Clifton Perry, from New Zeeland and Philipp Wolf, co-chair of the Health and Wellbeing committee, from Canada. Starting with a discussion about the newly formed Education Committee of the VES, it will continue with an interview and discussion about the equally new Health and Wellbeing Committee.

The Studio program will have behind the scenes looks at the upcoming talents from Filmakademie Baden Wuerttemberg’s Animationsinstitut. In addition to the presentation of visual effects and animation graduation projects, technical directing students will present results of their set extension workshop. This year, the workshop focused on the integration of technological innovation, with the visual effects created with an LED wall instead of green screen technology.