Event confirms Phil Tippett and Aardman’s David Sproxton as speakers at the annual conference set for April 24-27 in Stuttgart, Germany. 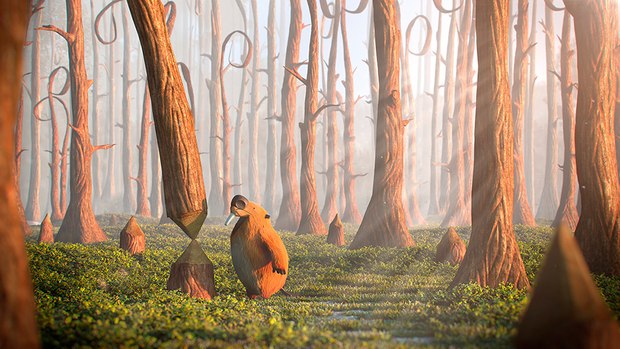 Bruno the Beaver stars in ‘Behind the Beard,’ the first in a series of official trailers for FMX 2018.

LUDWIGSBURG, GERMANY -- Creating Worlds is the theme of FMX 2018 Conference on Animation, Effects, Games and Immersive Media, set for April 24-27 in Stuttgart, Germany.

Moreover, FMX releases the first episode of the official 2018 trailer Behind the Beard, depicting the literally hairy adventures of Bruno the Beaver.

Creating Worlds, the central theme of FMX 2018, will look beyond the production and technological aspects of media and entertainment and explore all facets of the creative process, from the initial creative spark to the building and marketing of an intellectual property. Based on the theme, the FMX 2018 program consists of presentations, workshops, masterclasses, exhibition floors and screenings centered on all aspects of animation, VFX, games and immersive media.

FMX 2018 will not only cover tracks on artistic topics such as Concept Art, Sound Design and The Art of Animation but also on the latest technology developments in Lighting & Rendering, Real-Time as well as state-of-the-art simulation and visualization technologies. Moreover, innovative VR, AR and 360-degree projects will be part of the diverse program, as well as the new tracks Characters & Creatures and World Building, business related topics such as Managing Change, and presentations on Social Impact discussing socially critical questions.

The idea behind the FMX track Then & Now -- curated by Ian Failes, freelance journalist -- is to have some of these giants present their pioneering effects and animation techniques, which are still incredibly valid today. Phil Tippett (Tippett Studio) is one of these giants in visual effects. His presentation will cover the work he has been doing in the VFX industry for the past forty years, from stop motion used in the first Star Wars movies to the revolutionary digital effects in Jurassic Park, Starship Troopers, and up to current projects such as his epic passion project MAD GOD.

Despite the extensive use of digital technologies, stop motion is more popular than ever. David Sproxton (Aardman Animations) will talk about the IP building on Shaun the Sheep and its characteristic claymated world that has been established as a strong international brand.

Foundry is the first company to join FMX 2018 as a main partner. Moreover, Golaem, Laubwerk, Mercenaries Engineering, Ranch Computing and RebusFarm will be part of the FMX Marketplace, while the teams of TRIXTER, MPC and The Mill will have a booth at the Recruiting Hub.

FMX 2018 will be accompanied by Bruno the Beaver. Bruno is starring in the official trailer series Behind the Beard, whose episodes will be successively released during the months before FMX 2018. For the first time in FMX history the conference not only comes along with a trailer but also with a corresponding tablet game named Behind the Beard -- Beaver your Beard. The transmedia project Behind the Beard was created by students at Animationsinstitut (Director: Noel Winzen, Marc Angele | Producer: Ela Duca | Technical Director: Tim Lehr) in cooperation with the Trossingen University of Music.

In the first trailer episode Bruno is confronted with some stormy winds. Unfortunately, he will experience other natural forces which will shake his world to the ground. The trailer series Behind the Beard is all about everyday problems, the ones that might seem insignificant and dull at first but end up turning our world upside down. This very relatable topic is discussed through the story of Bruno, a little beaver living in a forest, and Ben, a bearded hipster.

The next Behind the Beard episode will be released in January 2018.