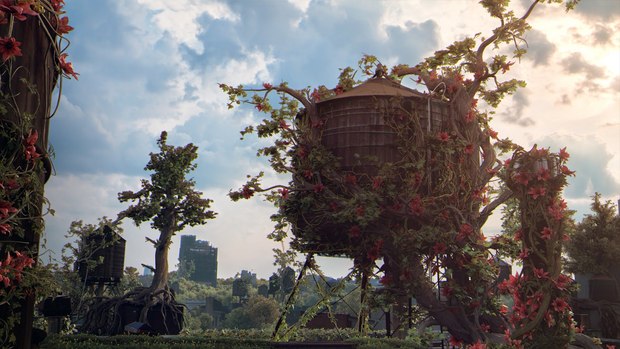 Ludwigsburg, Germany -- The student project Wrapped has been selected as the source material for the next FMX trailer. Wrapped, which was created by Roman Kaelin, Falko Paeper and Florian Wittmann, thus promotes the 20th anniversary edition of Europe's most influential conference for digital entertainment, where Art, Technology and Business meet. FMX 2015 takes place from May 5-8 in Stuttgart next year.

Watch a teaser for the trailer, which was first released on the FMX website, in the player below:

Wrapped has scooped several awards at animation and visual effects events around the world, including prizes at the prestigious SIGGRAPH Computer Animation Festival, the Oscar-qualifying LA Shorts Fest and the Germany-based animago AWARD.

Roman Kaelin, Falko Paeper and Florian Wittmann have successfully graduated from the animation program at the Institute of Animation, Visual Effects and digital Postproduction at the Filmakademie Baden-Wuerttemberg; Wrapped is their diploma project. The three artists are more than happy that their film was chosen:

“It is a great honor that our film serves as the visual flagship for FMX -- especially since FMX is such an important event for the whole VFX community in Europe and beyond,” the artists sdaid in a statement. “Moreover, we love the fact that our film provides the imagery for this special anniversary edition.”

Wrapped focuses on the idea that the only constant is change, using techniques such as time lapse, live action and stunning 3D computer graphics. Viewers watch in awe as nature takes back the so-called civilized world, wrapping New York and its surroundings in beautiful if slightly threatening green fauna. The film conveys the message that even though decay is ultimately inevitable, it always holds the possibility of renewal and transformation.

However, the initial concept differed drastically from the four-minute film that is now being screened at festivals worldwide:

“In the beginning we intended to dedicate our diploma film to street art,” the filmmakers said. “Only after Wrapped became the official title, we developed the idea of wrapping architecture.”

The full FMX 2015 trailer will be released next year, shortly before the event.