Feature documentary by Michael Fiore and Erik Sharkey following the life and career of legendary animator and story artist Floyd Norman to have its world premiere at the 2016 Santa Barbara International Film Festival on February 5. 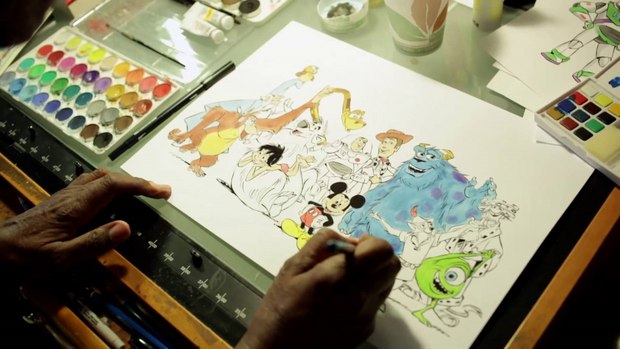 Michael Fiore Films presents the World Premiere of the feature-length documentary following the life and career of legendary animator and story artist Floyd Norman. Premiere screenings will take place at the Santa Barbara International Film Festival on Friday, February 5 at 8pm (Metro 3) and Sunday, February 7 at 10:20am (Fiesta 2).

Filmmakers Michael Fiore (producer of Sony Screen Gem’s Keep Watching starring Bella Thorne) and Erik Sharkey (director of Drew: The Man Behind the Poster) will be in attendance alongside Santa Barbara native Floyd Norman, 80, and the film’s music composer Ryan Shore. The filmmakers will moderate a Q&A session with each screening.

Born and bred in Santa Barbara, CA, Norman is the undisputed Forrest Gump of the animation world. Hired as the first African-American at Disney in 1956, he would later be hand-picked by Walt Disney to join the story team on the Jungle Book. After Walt’s death, Norman left Disney to start his own company to produce black history films for high schools. He and his partners would later work with Hanna Barbera, animate the original Fat Albert Special, as well as the titles to Soul Train.

Life as an animator is a nomadic one, but Mr. Norman spent the majority of his career at Disney.

He views it as his “home.” Retired by Disney at age 65 in 2000, the documentary focuses on Norman’s difficulty with a retirement he was not ready for. Not one to quit, Norman chose to occupy an empty cubicle at Disney Publishing for the last 15 years. As he puts it, “[He] just won’t leave.” A term has been coined by Disney employees -- “Floydering.” While not on staff, his proximity to other Disney personnel has led him to pick up freelance work. He continues to have an impact on animation as both an artist and mentor. As Norman says, “[He] [plans] to die at the drawing board.”