‘Floyd Norman: An Animated Life’ Opens in Theaters This Weekend! 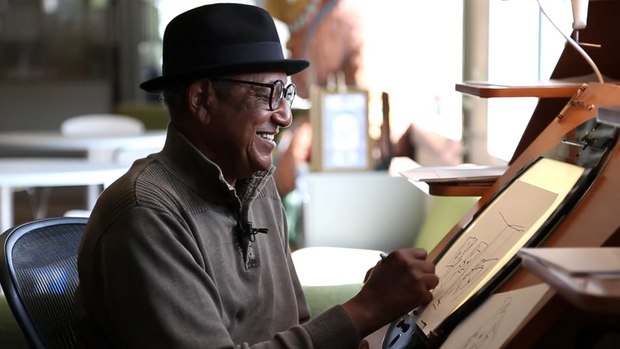 Floyd Norman: An Animated Life, the feature-length documentary following the life and career of legendary animator and story artist Floyd Norman by Michael Fiore and Erik Sharkey, makes its theatrical debut with a limited engagement in select cities and day-and-date VOD and digital release on Friday, August 26. Life as an animator is a nomadic one, but Norman spent the majority of his career at Disney, and views it as his “home.” Retired by Disney at age 65 in 2000, the documentary focuses on Norman’s difficulty with a retirement he was not ready for. Not one to quit, Norman chose to occupy an empty cubicle at Disney Publishing for the last 15 years. As he puts it, “[He] just won’t leave.” A term has been coined by Disney employees -- “Floydering.” While not on staff, his proximity to other Disney personnel has led him to pick up freelance work. He continues to have an impact on animation as both an artist and mentor. As Norman says in the film, he plans “to die at the drawing board.”

Floyd Norman: An Animated Life had its world premiere at the Santa Barbara International Film Festival in February and won the audience award at the Bentonville Film Festival, and also screened earlier in July at the San Diego Comic-Con Film Festival, where it received the award for best documentary.

Learn more about the film, and where to see it, at www.floydnormanmovie.com.