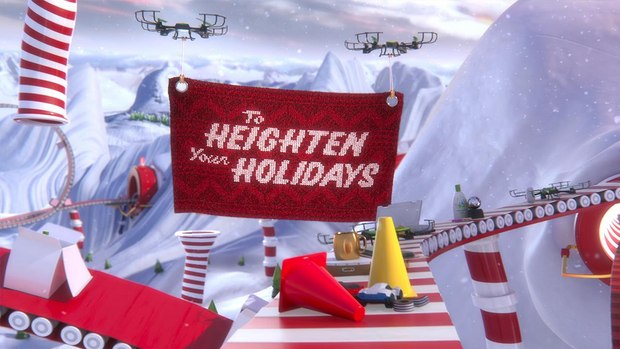 LOS ANGELES and CHICAGO -- Creative production studio Flavor was recently engaged by Target to promote the brand's playful line of curated, specially designed Wonderpacks that are now available on Target.com. The result is the 54 second animated brand film currently appearing across the brand's social media channels.

The project was directed by Flavor creative directors Jason Cook and Brian McCauley, who worked directly with Target’s executives from the pitch and concept phase all the way through completion.

"From the very beginning, the clients at Target were uniquely collaborative," McCauley began. "Directing the project with Jason was an awesome experience. Together we focused on creating an animation that delivers a fun and entertaining experience while also living up to Target's hallmark quality."

In the holiday-themed animated film, viewers are transported inside the magical Wonderpack Factory, where Wonderpacks are packed with wonder, joy and unexpected experiences for the whole family.

"The briefing really called for us to introduce the World of Wonderpacks in fun ways that would convey the experiences they're packaging, and build excitement," Cook explained. "Our clients really pushed us and gave us the freedom to create a fantastical world that could do the impossible."

Cook and McCauley also shared the clients' hopes for seeing the Wonderpack products in different contexts, to communicate the idea of creating experiences. With Willy Wonka and Dr. Seuss as influences, Flavor's teams in LA and Chicago joined forces to imaginatively bring the factory, where Wonderpacks are assembled, to meticulous life using a balance of CG scenes and matte paintings.

"This is a story about regular boxes on a journey to become incredible Wonderpack boxes, so their moment of transformation had to be spectacular. We devised a slingshot system that would spray the boxes with magical glittery particles that become the final Wonderpack graphic packaging," Cook continued. "As we went through the process, we came up with more and more fun ideas. There are a lot of little gags happening in the shots that you will surely pick up on with repeated viewings!"

The project's workflow began with storyboards, where the story was initially crafted. That imagery was assembled in an animatic which served as the blueprint for timing and key storytelling aspects. Since the project is 100% CG, every element was made from scratch in Autodesk Maya 2016, with VRAY 3.1 used for rendering.

"Maya is our go-to tool for these types of heavy CG productions," McCauley confirmed. "We had a short schedule, so we started to build out the elements we needed right away. This included the modeling and rigging of the conveyor belts, boxes, some key products, environmental elements, and of course, the cats."

As elements were prepared, they were edited into the pre-vis and the look was developed further. "Our lighting TD Josh Kohlmeier started producing really beautiful results right away that were used to help set the look of both the exterior and interior lighting in each shot," Cook added. "There is nothing more exciting than seeing a shot start out as a drawing, move into layout, and then become fully realized with textures and lighting."

Adding the finishing touches to the project also involved quite a bit of VFX artistry. Aside from snow flurries in each shot, there is considerable particle and smoke work sprinkled throughout. Early in the spot, a magic wand reveals products in a box with a puff of smoke; and later, viewers see a rainfall made of glowsticks. Particle effects also appear at the spot's end, where slingshots decorate the Wonderpacks.

"This job really is the perfect kind of project for Flavor," concluded Darren Jaffe, executive producer for Flavor LA. "We were able to use our skills in storytelling, design, CG, and animation to help craft a promo that really captures the spirit of the holidays and the Wonderpacks experience for Target."