Originally slated for a DVD release, 70-minute feature directed by Stephen Donnelly and Olly Reid is a reboot of Mattel’s ‘Monster High’ franchise. 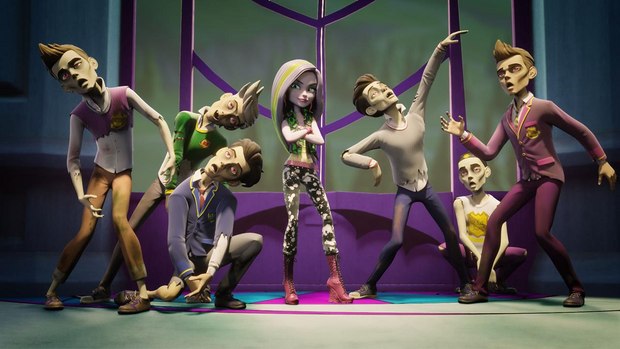 GLASGOW, UK -- Scottish animation studio, Flaunt’s first feature length project Welcome to Monster High, for Mattel’s Playground Productions, had its theatrical release in selected cinemas across the world. Directed by Stephen Donnelly and Olly Reid, the 70-minute feature is a reboot of the established Monster High franchise. Welcome to Monster High brings back favorite characters such as Draculaura, Frankie Stein, Clawdeen, Cleo and Lagoona, and introduces some new faces along the way.

The story tells of the school's conception, and how the dream of monsters and humans living side by side became a reality. Working closely with Mattel, Flaunt created fresh, bold interpretations of the new toy line. The studio’s challenge was to retain the iconic look of the Monster High toys, while updating them to better suit animation. Flaunt modified the traditional doll proportions and facial structure, favouring fluid lines and clean features, arriving at characters capable of both dynamic action and subtle, engaging performances. Still recognizably Monster High, but streamlined and ready for action.

“The love was poured not only into designing the characters but also extended to the look of their world too. We designed rich, atmospheric sets and a plethora of bespoke props, balancing detail with clean silhouettes, adding true visual depth to the story of Draculaura and her Ghoulfriends,” said Donnelly.

Flaunt worked closely with the writers at Mattel to find the right balance of action, humor and emotion. Shane Amsterdam and Jun Falkenstein (Mattel's Creative Director and Supervising Director) were really open to surreal moments of comedy, or beats that added depth to the characters' journeys. This dynamic between Flaunt and Mattel made for a very collaborative experience.

The vibrant visual update of the Monster High world was complimented by a dynamic animation style. 2D animation was a big influence on the strong poses and snappy movement of the characters.

“We had a fantastic group animators and layout artists, plucked from around the globe. Together they created incredibly characterful and nuanced performances that captures the spirit of each character. Complemented by the heroic efforts of our brilliant lighting team. The final film is plush, fun, bold and charming,” added Reid.

Originally planned for DVD release, the feature premiered in selected cinemas across the world.  Monster High partnered with Lady Gaga’s Born This Way Foundation to host an exclusive behind-the-scenes look and an exciting “Dance the Fright Away” pre-show featuring a dance tutorial by YouTube superstar choreographer Matt Steffanina.

"Creating new content for one of the biggest toy brands of all time was a great opportunity," said Flaunt Executive Producer Andrew Pearce. "Mattel shared our goals to create a character-driven story, packed with humour and charm. As the feature animation world continues to grow the Flaunt team are expanding and growing alongside it. We are really ambitious in this long format space and can’t wait to announce our newest productions.”

Mattel Creative Director Shane Amsterdam was delighted with the early feedback on the Welcome to Monster High. "Girls, both fans and non-fans, loved the movie; they talked about how it was more amazing than they thought it could be; they loved the humor; they loved the powers; they loved the style."

Welcome to Monster High was released in selected cinemas in the US on August 27th. DVD release dates are still to be announced. Flaunt's second Monster High feature is now in production, due for release in Spring 2017.