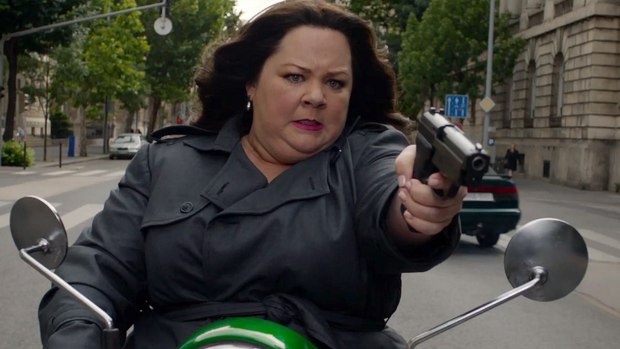 “For Spy we used Fusion for our core compositing work, such as projection and rig and wire removal,” Nelson said. “Fusion’s workflow is so efficient and flexible, and it’s a snap to import a 3D track into Fusion and paint out what you don't want or project a frame to help develop the scene.”

In one chase sequence, a stolen car is driven through the streets of Paris before skidding to a halt. “The stunt was practiced numerous times, so there were multiple skid marks on the street. Since the cameras were moving, tracking and dollying, it wasn't a case of being able to do an easy paint out. But it was still very easy to get rid of them in Fusion,” Nelson explained. “We had to 3D track the car and create geometry and multiple projections in Fusion. We had 15 projections in one shot to get a clean slate since the camera was moving so much.” In another action sequence involving stunt people hanging off of a helicopter, some shots required a standard paint out, but on more complex ones, Jeremy again used the same process in Fusion. “We tracked the helicopter, recreated it in 3D and got rid of the harnesses using Fusion’s rotoscoping tools. Fusion has the best rotoscoping tools I’ve ever used. They are so easy to use,” Nelson said.

According to William Mesa, owner of Flash Film Works, Fusion Studio was also used to finesse an intricate fight scene involving a villain and her high heels. “The actress did all her own stunts in flat shoes for the scene, and we added high heels to the shots,” he said.

“We built the 3D model in LightWave, brought it into Fusion and did all the 3D tracking, placing and lighting, so everything matched in the shots,” Mesa added. “The lighting changes in particular were very intricate as we had to perfect the light on the heels as the scene transitioned through different lighting conditions, from inside lighting to outside lighting and more.

Key to helping Flash Film Works deliver its work on Spy was Fusion’s efficient node-based workflow. “Nodes are the way you need to composite,” Nelson concluded. “When working with a team and taking over a shot, it’s so easy to zoom out in the node view and see what’s going on, errors or where things are breaking. It’s also easier for the branches, for flow and to share information across the flow.”