‘True: Happy Hearts Day’ the first release in a lineup of new content which includes all new episodes, seasonal specials, a 44-minute movie and a mix of comedic shorts and musical content rolling out on the service throughout 2019 and 2020. 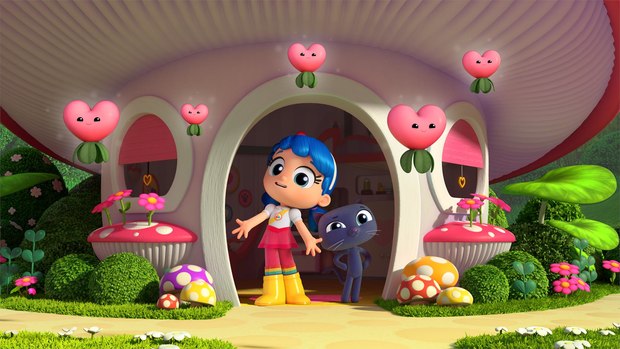 It’s Happy Hearts Day! With the help of the magical Wishes, True and Bartleby must cheer up the Rainbow Kingdom when its loneliest citizen Glummy Glooma starts to turn things blue! The 22-minute special episode is packed with adventure, big laughs, and a heart-warming message that it’s okay to be different.

On the heels of last summer’s successful launch of Season 2 titles True: Magical Friends & True: Wonderful Wishes, and the recent launch of music video compilation Dance & Sing with True Vol: 2, “True: Happy Hearts Day” is the first release in a lineup of new content which includes all new episodes, seasonal specials, a 44-minute movie and a mix of comedic shorts and musical content rolling out on the service throughout 2019 and 2020.

The hit series’ first line of collectible toys launched last fall at Walmart stores across Canada, and Halloween costumes sold out nationwide at Party City and other online retailers. Additional merchandise will be hitting retail in North America later this year.

True and the Rainbow Kingdom is produced by Guru Studio with Pharrell Williams’ i am OTHER label, along with fine art collective FriendsWithYou and California-based Home Plate Entertainment.

The series follows eight-year-old True, and her hilarious best friend Bartleby the cat, as they come to the rescue of the Rainbow Kingdom’s whimsical citizens. True is the only one that can unleash the power of the Magical Wishes from the Wishing Tree in order to set things right and keep all the residents safe. True and Bartleby’s adventures empower both boys and girls to be mindful, courageous and respectful of all living things. These series addresses several key themes for children including fostering empathy, promoting mindfulness, encouraging critical thinking as well as exploring and caring for the physical world.

Watch the new trailer for “True: Happy Hearts Day” in the player below, and then keep scrolling to see imagery from the episode: