First Look at 'Rise of the Teenage Mutant Ninja Turtles'

Nickelodeon revamps and reimagines the classic characters for a new 26-episode 2D series set to debut later this year. 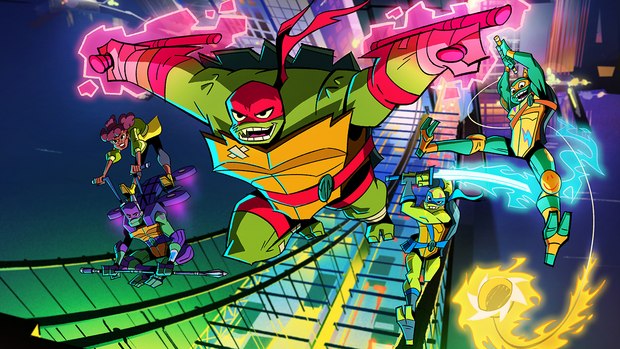 Nickelodeon is bringing back an old favorite with a new series titled 'Rise of the Teenage Mutant Ninja Turtles.'

Rise of the Teenage Mutant Ninja Turtles reimagines the classic characters in a new way, featuring jagged-shelled Raphael as a snapping turtle, wielding twin tonfas as his weapons; Leonardo as a red-eared slider, using an ōdachi sword; Donatello as a soft-shell turtle, sporting a tech-bo staff; and Michelangelo as a box turtle, arming himself with a kusari-fundo. Along for the adventure is the Turtles’ most trusted ally, April O’Neil, a street savvy native New Yorker and Splinter, father figure and sensei to the turtles.

Considered one of the most popular kids’ television programs of the 1980s, Teenage Mutant Ninja Turtles is a classic, global property created in 1984 by Kevin Eastman and Peter Laird. It first debuted as a successful comic book series and then became a hit animated TV show, a live-action television series and later spawned numerous blockbuster theatrical releases. The property is a global consumer products powerhouse, winning in every category that has hit shelves to date -- with toys, apparel, video games, DVDs and more -- and generating billions of dollars at retail. Teenage Mutant Ninja Turtles has been the No. 1 action figure for the past three years and the franchise is a previous recipient of the Toy Industry Association’s top honor for Property of the Year at the TOTY Awards.