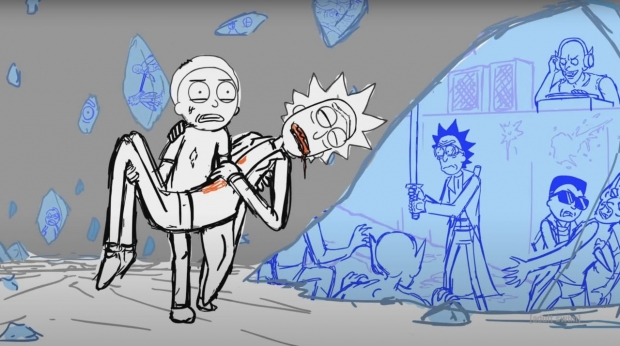 Rick and Morty are having a very rough time in the series’ Season 5 First Look. While the animation is still in its early storyboarding stages, we can already tell this season is going to be just as genius, hilarious, and kooky as we have come to expect.

In this First Look, Morty carries a wounded Rick through an alternate dimension, crash lands their spaceship in the ocean, and meets Rick’s arch nemesis Mr. Nimbus. It’s a lot to digest in two minutes. Watch the first scene of Rick and Morty Season 5 now:

Production on Season 5 seems to moving much faster than on seasons past, with over year-long breaks being the norm. Series co-creator Dan Harmon, in a sit down with SyFy Wire, said, “We’re more on schedule than we’ve ever been. It kind of makes you have to focus on the whole process when you don't have this office environment anymore.” Not only is Season 5 “mostly in the can” according to an interview series co-creator Justin Roiland had with Slash Film, Harmon himself has also hinted that the team is already working on Season 7.

While most of the new season is still a mystery, we’re sure we’ll see more of Space Beth, Birdperson’s return as Phoenixperson, and the ever elusive Evil Morty. While no release date has been officially announced, it wouldn’t be outrageous to predict Season 5 will drop in 2021.