Directed by longtime Pixar artist Sanjay Patel, short film is set to play ahead of Pete Sohn’s ‘The Good Dinosaur’ on November 25. 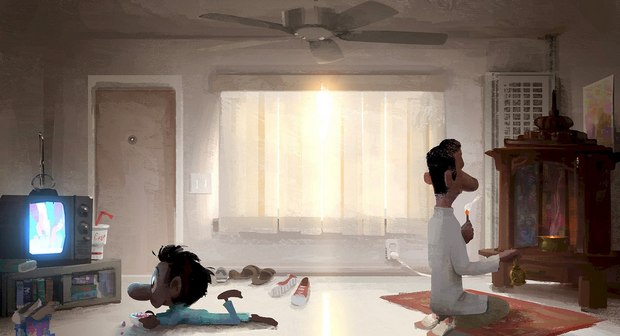 Making 2015 a landmark year for Pixar fans, the studio is releasing two feature films, Inside Out and The Good Dinosaur, within a span of five months. And that means audiences will also be treated to two new Pixar shorts.

The first short, Lava, directed by James Ford Murphy and playing ahead of Pete Docter’s Inside Out, was announced last year. Now there is news of another short, Sanjay’s Super Team, directed by Sanjay Patel.

Although this will be Patel’s first turn as director, he has been with Pixar since 1996, serving as an animator on features including A Bug’s Life, Toy Story 2, Monsters Inc., The Incredibles, Ratatouille, and Monsters University.

Set to play ahead of Pete Sohn’s The Good Dinosaur when it releases in November, Sanjay’s Super Team will have its world premiere at the Annecy International Animation Film Festival in June.

The Los Angeles Times has a first look at Sanjay’s Super Team, which is about a little boy coming to understand his father’s Hinduism. From the LAT:

The seven-minute short begins with young Sanjay watching cartoons and eating cereal in a bland, beige room as his father jingles a bell, beckoning him to join in meditation. Reluctant and bored by the ceremony, Sanjay begins daydreaming a kind of ancient, Hindu version of “The Avengers,” with the gods appearing like superheroes. As the daydream progresses, the color, light and animation of the film grows increasingly dazzling and cosmic, and Sanjay grows closer to understanding his father’s inner world.

Sanjay’s Super Team is produced by Nicole Paradis Grindle (associate producer of Toy Story 3 and Monsters University), with music composed by Mychael Danna (Life of Pi). The short will premiere in North America with The Good Dinosaur on November 25th.