Upcoming reboot of the classic animated series features art direction by Kevin Dart, with the animation provided by Chromosphere. 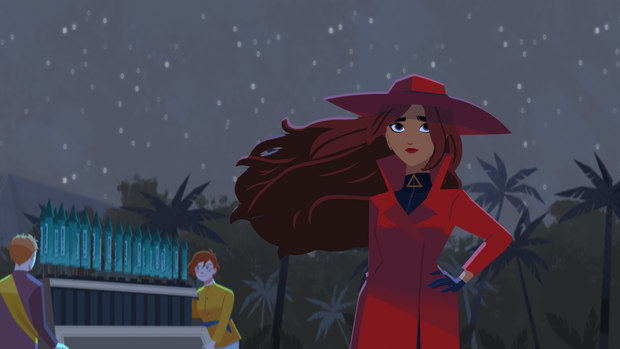 Featuring the voice talents of Gina Rodriguez in the title role and Finn Wolfhard as Player, Carmen’s chief accomplice and friend, Carmen Sandiego debuts on Netflix on Friday, January 18.

Netflix has announced a premiere date for its upcoming reboot of the classic animated series Carmen Sandiego. Featuring the voice talents of Jane the Virgin‘s Gina Rodriguez in the title role, Carmen Sandiego debuts on the streaming service on Friday, January 18.

Carmen Sandiego made her debut in a 1980s computer game franchise Where in the World Is Carmen Sandiego? and probably is best known for the Greg Lee-hosted game show that aired on PBS from 1991-1995. The animated series ran from 1994 to 1999 on Fox Kids.

Check out the announcement and key art below:

WHEN in the world is Carmen Sandiego coming to Netflix? *hacks database* January 18! Who’s ready to go on an adventure with @HereIsGina and @FinnSkata? #NetflixNewsWeek pic.twitter.com/d4UC2kb5vZ