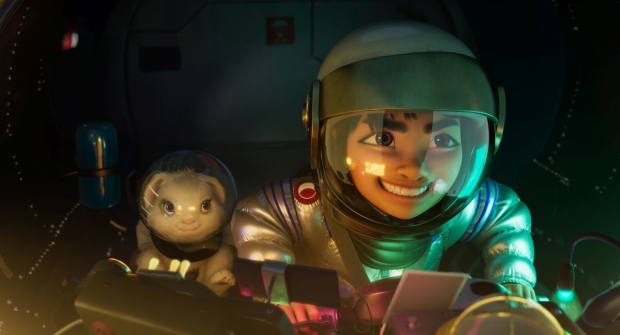 We finally get our first look at Netflix’s highly anticipated new animated musical adventure, Over the Moon, directed by the legendary Oscar-winning director Glen Keane (Dear Basketball) and co-directed by Oscar-winning director John Kahrs (Paperman). Produced by Pearl Studios, the animation house that co-produced last year’s Abominable with DreamWorks Animation, the film is produced by Gennie Rim (Dear Basketball) and Peilin Chou (Abominable). Over the Moon is scheduled for release this fall.

In the film, Fei Fei, a bright young girl fueled with determination and a passion for science, builds a rocket ship to the moon to prove the existence of a legendary Moon Goddess. There she ends up on an unexpected quest, and discovers a whimsical land of fantastical creatures.  In the trailer we meet our feisty heroine, whose unyielding quest to build a rocket and prove the Moon Goddess is not just a silly myth puts her on course for a miraculous journey no one could have predicted. The production design and animation are beautiful; and, there’s a rabbit in a space suit. Say no more!

One of Chou’s first initiatives when she joined Pearl, known then as Oriental DreamWorks, was to host an annual Brain Trust summit that brought together animation and entertainment talent for a series of meetings at the studio’s Shanghai facility. It was during that first summit in 2015 that Chou first heard a pitch, from executive producer Janet Yang (The Joy Luck Club), about a little girl who builds a rocket to the moon to see if the legendary moon goddess, Chang’e, exists. Chou brought in screenwriter Audrey Wells (The Hate U Give, Under the Tuscan Sun), who began fleshing out the story in Spring of 2016. The film had been in development for with Pearl for over a year when Wells broke the news to Chou that she was dying with cancer, and was unsure how much time she still had.

Chou’s determination to get the film made took on an additional sense of urgency; her search for a director became a mission. She met Keane that June at the Annecy Festival. Fresh off his Oscar win for Dear Basketball, the famed Disney animator hadn’t seen Chou since they’d worked together at Disney 20 years earlier developing Rapunzel, which eventually became Tangled. Once Keane got the script, he was quickly hooked. According to the director, “Walt Disney was always talking about the ‘plausible impossible.’ And I thought, a 13-year-old girl building a rocket to the moon? I don’t know... But as I was reading it, I got to the page where Fei Fei’s rocket launches and then it runs out of power and starts falling back, like they're going to die. And I thought, Yes! Now I believe it. But you've got to save them somehow! I was suddenly invested. It was when that beam of light hit them and the moon lions leapt onto the page that I knew I had to direct this movie.”

Sadly, Wells, whose other writing credits include A Dog’s Purpose (2017), The Game Plan (2007), George of the Jungle (1997) and Under the Tuscan Sun (2003), which she also directed, succumbed to her illness on October 4, 2018. Her screenplay for The Hate U Give, based on author Angie Thomas’ critically acclaimed 2017 novel, was turned into a film that was released in theaters on October 5, one day after her passing.

“There has never been a time when this film has been more relevant, or perhaps when the world needed it more,” Chou says. “The themes of Over the Moon, which Audrey portrayed with passion and integrity, are all about opening your heart and learning to accept new things. It tells us that in challenging or difficult times, the answer to almost anything is always love.” Netflix will release the film worldwide except China; Pearl Studios will distribute the film in the Middle Kingdom.