With Sony’s live-action adaptation of the beloved PlayStation game wrapping its shoot, we get our first peek at Victor Sullivan’s hair, makeup, and iconic shirt. 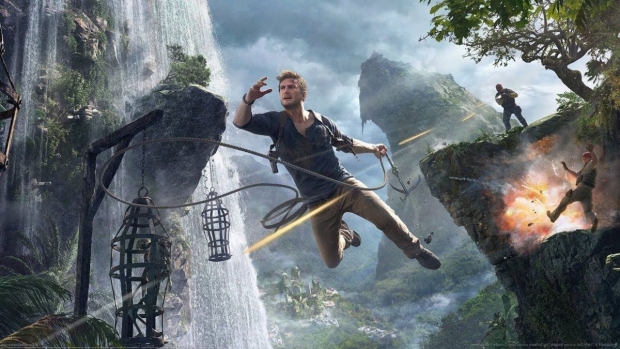 It’s actually happened! After over a decade of setbacks and a circulating roster of potential directors, Sony’s Uncharted live-action adaption has wrapped filming.

Greatness from small beginnings. That’s a wrap on @UnchartedMovie. pic.twitter.com/eD5ZyKOthi

While our young Nathan Drake, Tom Holland, is back in Atlanta filming Spider-Man 3, Mark Wahlberg has revealed first looks of his character, Victor "Sully" Sullivan. Wahlberg, who was originally set to play Drake before the film pivoted to an origin story, is now serving as Drake’s older (but still sexy!) mentor and artifact hunting partner. While Holland’s costuming differs from the look we know and love, Sully will be donning a shirt ripped straight from the games.

Even more exciting is a video of Wahlberg in full Sully hair and makeup. He makes that ‘stach look good!

When anyone asks me how the Dodger game went tonight...

Also, Mark Wahlberg's Sully in the Uncharted movie it seems like.. pic.twitter.com/pOgWcSSOF6

Despite the film’s troubled beginnings, these sneak peaks are extremely promising. While video game movies rarely do well, we have high hopes this wisecracking duo will bring some good old-fashioned adventuring and levity to a rather stagnant theatrical schedule.

Uncharted is still set to hit theaters on July 16, 2021, if theaters do indeed still exist next summer.