The marketing push for Marvel Entertainment’s forthcoming ‘Ant-Man’ feature begins in earnest with a new ant-sized poster, an Entertainment Weekly cover, and the first full-blown trailer. 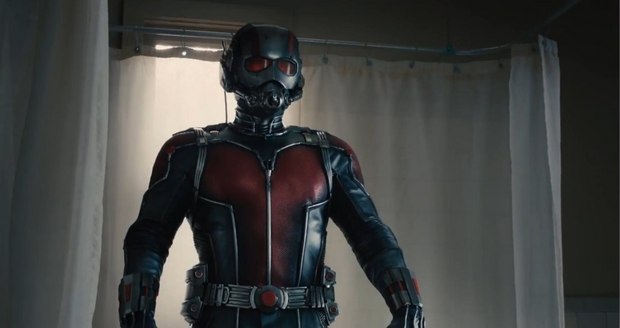 The wait is finally over! On the heels of last Friday’s “ant-sized” and Saturday’s “human-sized” preview teasers, the marketing push for Marvel Entertainment’s forthcoming Ant-Man feature has begun in earnest.

The push begins with a new ant-sized poster, an Entertainment Weekly cover, and a full-blown trailer first unveiled on Tuesday night during the two-hour premiere of ABC’s Agent Carter.

The new teaser -- which stretches to nearly two minutes -- gives fans the first real look at Ant-Man and provides the setup for a joke:

Directed by Peyton Reed, Marvel's Ant-Man stars Paul Rudd as Scott Lang, a petty criminal who acquires the ability to shrink in size but increase in strength and become a superhero known as Ant-Man. Michael Douglas co-stars as Hank Pym, the scientist who originally invented the Ant-Man technology and mentors Lang to take over from him.

The next evolution of the Marvel Cinematic Universe brings a founding member of The Avengers to the big screen for the first time with Marvel Studios' Ant-Man. Armed with the astonishing ability to shrink in scale but increase in strength, master thief Scott Lang must embrace his inner-hero and help his mentor, Dr. Hank Pym, protect the secret behind his spectacular Ant-Man suit from a new generation of towering threats. Against seemingly insurmountable obstacles, Pym and Lang must plan and pull off a heist that will save the world.

Check out the new poster and EW cover, below: