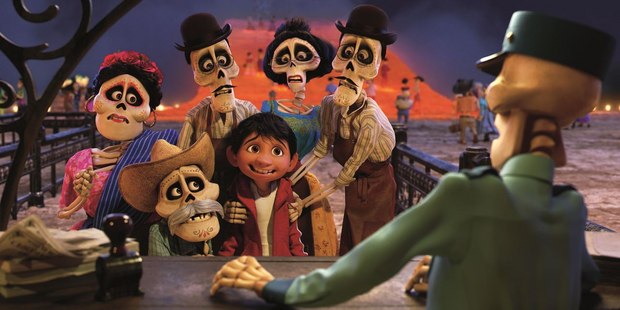 On the heels of this week’s unveiling of the cast and characters for director Lee Unkrich’s Día de los Muertos-themed animated feature Coco, Disney•Pixar has unveiled a the first full-length trailer for the film.

Billed as a multi-generational story about the power of family relationships, Coco follows Miguel (voiced by newcomer Anthony Gonzalez). Despite his family’s baffling generations-old ban on music, Miguel dreams of becoming an accomplished musician like his idol, Ernesto de la Cruz (Benjamin Bratt). Desperate to prove his talent, Miguel finds himself magically transported to the stunning and colorful Land of the Dead following a mysterious chain of events. Along the way, he meets charming trickster Hector (voice of Gael García Bernal), and together, they set off on an extraordinary journey to unlock the real story behind Miguel’s family history.

The new trailer lays out the basic story with gorgeous visuals that include close looks at the production design of the Land of the Living and the Land of the Dead. Check it out in the player below: