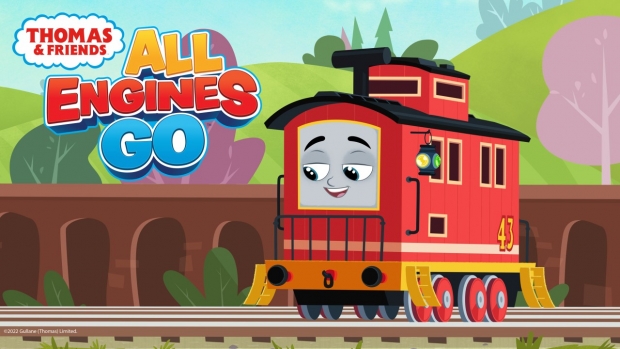 Mattel, Inc. has announced the introduction of Bruno, the first autistic character in the iconic Thomas & Friends franchise, to be voiced by Chuck Smith, an autistic actor. The new series regular will debut during the Season 26 premiere of Thomas & Friends: All Engines Go on Cartoon Network’s Cartoonito Monday, September 12 at 8:30 am ET/PT.

Bruno’s character was developed in collaboration with organizations including the Autistic Self Advocacy Network (ASAN) and Easterseals Southern California, as well as writers and spokespeople with autism, including Daniel Share-Strom and Aaron Likens.

In the series, Bruno is a joyful, pun-making brake car. He is great at his job and keeps big, heavy cargo steady with his strong brakes—a vital role in Thomas & Friends: All Engines Go. Bruno rolls in reverse at the end of the train, which gives him a unique perspective on the world. Detail-oriented, he enjoys schedules and routines and knows where all the tracks lead on Sodor. Bruno has stairs and a lantern on his bright, red exterior that indicates his emotional state, moving when he is excited or cautious. Bruno’s best day is spent with his friends, who love and respect him for who he is, just as he loves them back.

Bruno’s rich friendships and important work introduce audiences to a positive, neurodivergent role model through his on-screen presence. Together with key partners, Mattel carefully curated Bruno’s character to ensure an accurate fictional representation of an autistic child in the real world.

“The most important aspect of Bruno's development was getting autistic input throughout the process of creating the character and his interactions with his world,” said Zoe Gross, Director of Advocacy at Autism Self Advocacy Network (ASAN). “It was great to be able to contribute to that as part of a team of consultants from ASAN. Autistic people have been involved in all aspects of creating Bruno, from us as consultants to writers on the show and Bruno's voice actor—this makes Bruno ring true as an autistic character. I hope that Bruno will provide viewers with meaningful examples of inclusion in everyday life."

Experts from ASAN and Easterseals Southern California, alongside the creative and writing team at Mattel Television, leveraged years of experience dedicated to understanding autism to respectfully and artistically create an accurate, on-screen representation. Bruno brings examples of inclusion and neurodiversity to global audiences in a way never before done in Thomas & Friends.

“Our commitment and contributions alongside Mattel have ensured that an honest version of Bruno is what kids and families across the world will experience,” said Dr. Paula Pompa Craven, Chief Clinical Officer at Easterseals Southern California. “Audiences will be able to see the real-life experiences of an autistic child through Bruno, including opportunities to learn and grow alongside him as he demonstrates his ability to give and receive support from his friends.”

While Bruno thoughtfully reflects the traits and preferences of some autistic people, one animated character could never encompass the real-life experience of every autistic person. A key character within the Thomas & Friends franchise, Bruno’s introduction will span across all content with appearances in a YouTube series, music album, the Thomas & Friends Storytime podcast, the upcoming Mystery of Lookout Mountain special, and consumer products set to debut later this year.

“Bruno’s introduction organically embraces a global audience that is underrepresented and deserves to be celebrated in children’s programming,” said Christopher Keenan, Senior Vice President & Executive Producer, Global Content Development and Production at Mattel. “So much care and thought went into the development of his character, and we can’t wait for audiences to meet and love Bruno as much as we do.”

In its upcoming season on Cartoonito on Cartoon Network, Thomas & Friends: All Engines Go is back on track with big adventures fueled by friendship. Thomas and the gang will face surprises and discover more about one another as they play, learn, and grow together. The new season will feature new original songs and bigger adventures while welcoming everyone to the Island of Sodor for a toot-ally awesome journey!

The show is executive produced by Christopher Keenan and Frederic Soulie for Mattel and by Colin Bohm, Doug Murphy, and Pam Westman for Nelvana.