Gender-bending episode, ‘The Prince Who Wanted Everything,’ premieres Thursday, June 26 at 7:00 p.m. on Cartoon Network. 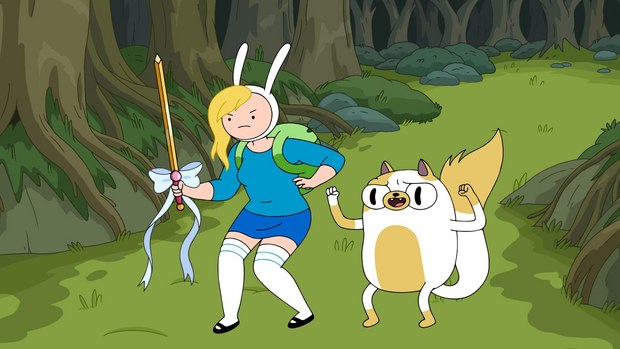 Fionna and Cake, stars of the much-loved special gender switching episodes of Adventure Time are back for a third installment on Cartoon Network.  What would it be like if Lumpy Space Princess were a boy? Find out in the episode, entitled “The Prince Who Wanted Everything,” slated to air Thursday, June 26 at 7:00 p.m. (ET, PT) as part of the Emmy award-winning series sixth season.

The first two “Fionna and Cake” specials were huge ratings successes, each averaging nearly 4.7 million viewers, according to Nielsen Media Research.Madeleine Martin (Fionna) and Roz Ryan (Cake) reprise their roles in the latest chapter of these fan-favorite episodes featuring a parallel universe where Fionna the Human and Cake the Cat have adventures and explore the land of Aaa! This time around, they are joined by the beautiful and sensitive Lumpy Space Prince (voiced by Peter Serafinowicz, Archer), who flees his cruel parents to start a new life. Currently in its sixth season, the ratings and pop culture phenomenon is having its most epic adventures ever! This April the season premiere kicked off with Finn on a quest to find his father and scored as Cartoon Network’s #1 telecast quarter to date among kids 2-11/9-14 and boys 9-14.  Throughout the season expect more revelations as Finn and Jake continue to traverse the mystical Land of Ooo.

The Emmy award-winning original animated series, Adventure Time has received numerous entertainment award citations over the years including the prestigious BAFTA (British Academy of Film and Television Arts) Awards. Most recently, Adventure Time received its second nomination for a Critics’ Choice Television Award for Best Animated Series and a Television Critics Association Awards nomination for Outstanding Achievement in Youth Programming. Last year, the series was nominated for its fourth Primetime Emmy Award for Outstanding Short-format Animated Program and “Thank You” a film by the Adventure Time team and Cartoon Network Studios was accepted into the 2013 Sundance Film Festival Shorts Film Program. Adventure Time, has grown in retail with its own apparel and accessories line, toys and games, comic books, interactive, home-video and even toys in McDonald’s Happy Meals. Adventure Time amazed millions last fall when the shows stars, Finn and Jake took their place among the legends, flying down the storied route of the 87thAnnual Macy’s Thanksgiving Day Parade.

Adventure Time is from the mind of first-time series creator Pendleton Ward and Cartoon Network Studios.