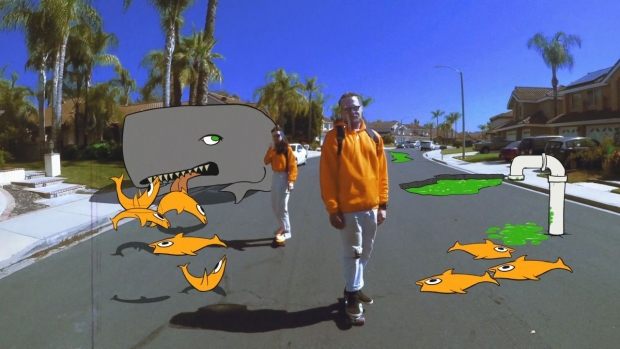 Indie/electronic duo FINKEL (Jane and Brian Spencer) released a track with UK Grime Artist Kamakaze; the song, Bleach Vial, is a commentary on the US Government’s mishandling of the pandemic, racial injustice, and the economy. To capture the message of the song visually, the duo tasked Robbie Shilstone and Erin Soorenko to design a music video by providing the filmmakers with a single prompt: Courage the Cowardly Dog, a creepy Cartoon Network fan favorite.

Courage the Cowardly Dog was an animated horror comedy created by John Dilworth, based on his 1996 Oscar-nominated short, The Chicken from Outer Space. The series had a four-season run on Cartoon Network from 1999-2002. It often threw the characters, a small anthropomorphic dog living with an elderly couple in “Nowhere,’ into bizarre, frequently disturbing and often paranormal or supernatural-type misadventures; the series is known for its dark, surreal humor and atmosphere.

While the song talks about the chaos and confusion of our current times, the pair set out to communicate this reality without coming across as too heavy handed. With the series as reference to help determine the film’s mood, Shilstone designed all the animated elements while Soorenko shot, edited, and art directed. The short overlays a series of 2D creatures and odd hazards with FINKEL captured in live-action skateboarding down a suburban street. All the assets were animated in Photoshop, then brought into After Effects for post. In all, the project took a bit over a month to produce.