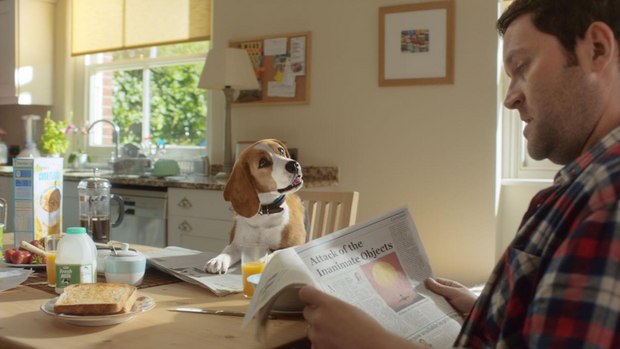 LONDON -- VCCP and Daniel Kleinman at Rattling Stick emphasise the bond between one man and his dog in their new campaign for life insurance company Beagle Street. The campaign launched on January 1, 2016 with two TVCs. The starring role was brought to life by the 3D team at Finish who created a photoreal CG-animated talking beagle called “Jeremy.”

VCCP creatives Javier Romartinez and Stephen Misir highlight the respective devotion between both owner and pet in their clever script for “Trousers.” Jeremy is more than a doting pet in warning his owner John of the dangers in everyday garments. In the 40 second TVC “Trousers” Jeremy informs his owner that he has taken the necessary precaution of the threat of trouser trips by removing them all from his wardrobe.

On-set supervision was critical to ensure seamless CG dog and live action integration and hence a tight team from Finish was assembled to capture and obtain all necessary information.

Jeremy is based on a real dog who was filmed on set. The physical reference meant Finish could match everything from the proportions, textures and groom of the fur to the real dog, which was invaluable to create the photo realistic CGI finish. Any lighting changes could also be matched to the actual visual reference for the final composite and grade.

Turning Jeremy into a talking dog required a balance between the complexities of human speech and the limitations of the canine muzzle. To help with this balance, the voice actor for the dog was also on set and filmed as reference.

Developing the grooming of the fur required painting multiple layers of attributes to control the overall look of the hair over the body of the dog. A lengthy and painstaking process, but the end result was absolutely worth the commitment.