Finishing out their Pride Month 2021 celebration, The Future Perfect Project shares the last two films in their series of 10 personal stories from LGBTQIA+ youth, aged 13-22, about the challenges they routinely face. 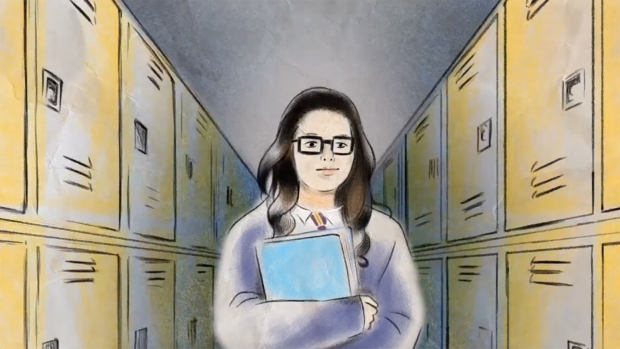 According to The Future Perfect Project co-founder Celeste Lecesne, who wrote the 1995 Oscar-winning live-action short, Trevor, and co-founded The Trevor Project, the only nationwide 24-hour suicide prevention and crisis intervention lifeline for LGBT and Questioning youth, “The current generation of queer young people has a lot to teach us about what it means to be fully human—if only we will listen. Just as my generation fought so hard for the right to be ourselves as out gays and lesbians, this generation is fighting to be recognized and respected as the people they know themselves to be.”

Take a few minutes to watch the two final episodes of How Life Is: Queer Youth Animated, and catchup on any of the previous eight you missed!

WILL – animated by Jules Webb: The homophobic culture at Will’s high school shows no sign of stopping, so his mom steps in with a great idea. “For a long time, for me, identity meant something that was not right within myself. Now I exist as openly as I can because I don’t want to go back.”

JULIANA- animated by Simone Maher: With a quirky personality and a queer mom, Juliana wants her LGBTQIA+ community to know that she is an ally who understands what it is like to feel ‘different.’ “People are going to come for you no matter what you do, so might as well do something you love.

CHEYENNE - animated by Lindsay Villagomes: Cheyenne expresses gender fluidity through cosplaying and creates her own LGBTQIA+ representation through “ships.” “In your head, you’d can be like, ‘Oh, this character is queer’ and no one can tell you otherwise. It’s a good way to make your own representation and to normalize it for you.”

LOGAN- animated by Iain Gardner: After struggling with her identity around gender and sexuality, Logan finally creates her own definition of what it means to be a bisexual woman. “The cool people are the ones who do whatever the hell they want and don’t let other people define who they are.”

SARAH - animated by Mady G: When Sarah develops a crush on Kiera Knightly, her friends want her to “figure out” if she is gay or straight. “I don’t think I actually knew what bisexual was until like 6th grade, and I remember thinking, ‘Is that what I am?’”

KEN - animated by Lily Ash Sakula: For Ken, who is non-binary, holding hands with their girlfriend in public is the most intimate and vulnerable demonstration of love. “For me, at least, I want to wear my heart on my arm and not my sleeve because it’s something that I don’t want to remove.”

VIVI - animated by Isabelle Sigrid: When Vivi donated six inches of her hair, everyone assumed she was gay, but she wasn’t out yet. She finds support at her school to help her live her best, out, queer life. “I wish other kids would understand that if somebody is LGBT, there’s nothing wrong with them... people often confuse something being different with something being wrong.”

ZION - animated by Bennie Candie: Gender and sexuality have never been heavy topics for Zion, who grew up with a white, lesbian mom and a Black activist father. “I’m a radical bad bitch with a sweet side who gives good hugs.”

CAL - animated by Sam Asher: Cal comes out to his family as a transgender man by throwing his own party and name-choosing ceremony. “I made my cake, and it was blue on the inside. And I wrote, ‘It’s a boy’ on it.”

BRIANNA - animated by Tessa Dabney: Brianna is on a mission to make sure every Black bisexual woman feels like they are good enough. “If I can do my part just by speaking up and being strong about who I am, that in itself gives other queer black women the chance to do that.”