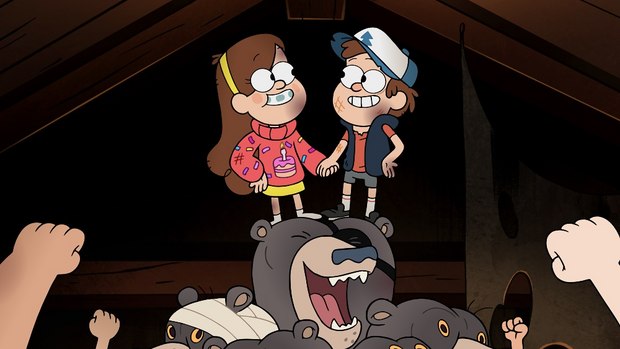 BURBANK, CA -- Disney's Emmy Award-winning animated series Gravity Falls reaches its final showdown in the highly anticipated one-hour finale episode on Monday, February 15 (7:00 p.m. EST) on Disney XD. In the episode titled "Weirdmageddon 3: Take Back The Falls," Ford discovers Bill's true motives and then a final confrontation with Bill leads to the Pines family's ultimate fate and greatest sacrifice. Starring Jason Ritter (Parenthood) as Dipper and Kristen Schaal (The Last Man on Earth) as Mabel, the animated adventure-comedy series was created and is executive-produced by Alex Hirsch. The series will continue to be presented daily on Disney XD and Disney Channels around the world.

Disney Publishing will release the official Gravity Falls: Journal 3, a book that appears within the TV series and is an integral part of the Gravity Falls story, in July 2016.

Since its premiere in June 2012, Gravity Falls has captivated millions of kids and families with its comedic storytelling, unique mysteries and beloved characters. In the U.S., it is the #1 series in Disney XD's history in total viewers and all target kid and boy demographics, and accounts for the network's Top 10 regular animated-series telecasts of all time in Kids 6-11 and the Top 6 in Boys 6-11. In addition to two Emmy Awards, the series won this year's Children's British Academy of Film and Television Award (BAFTA) and has garnered two Annie Awards.

Inspired by Hirsch's real-life adventures with his twin sister, Gravity Falls follows twin brother and sister Dipper and Mabel Pines on an adventure of a lifetime when they spend the summer with their great uncle, Grunkle Stan, in the mysterious town of Gravity Falls, Oregon.