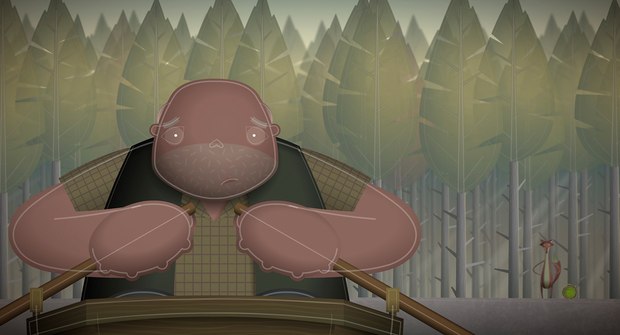 Based on an age-old conundrum, Take Rabbit is about a man who attempts to transport some unlikely passengers across a river in his tiny boat but soon realizes he’s taken on more than he bargained for.

The short features the vocal talents of Matt Berry (Toast Of London, The Mighty Boosh), Amelia Bullmore (I'm Alan Partridge, Brass Eye), Stephen Graham (This Is England, Boardwalk Empire) and Steve Pemberton (The League Of Gentlemen, Inside No.9). He also wrote and directed a pilot for Channel 4 in the UK titled Captain Sarcastic and directed three episodes of Rex the Runt. In 2002, he directed the half-hour special Robbie the Reindeer II – Legend of the Lost Tribe for Comic Relief and BBC Worldwide. The cast included the voices of Jeff Goldblum, Steve Coogan, Ricky Gervais and Sir David Attenborough, and the film won an International Emmy in 2003. Also that year, he made Out of Joint, a short film for South West Screen that was shortlisted for best short film and best comedy in the British Animation Awards 2004.

Producer Gareth Owen has worked extensively with Aardman Animations, winning a Children's TV BAFTA and an International Emmy award for his work as series producer of Shaun the Sheep and multiple awards for three series of Creature Comforts. The music is by Alex Lupo, the sound by Will Norie and the script editor was Al Wyatt.