With a focus on focus on Balkan animation, Slovakian animation festival to host The Quay Brothers and Steven Woloshen at its ninth edition running June 29 through July 3, 2016. 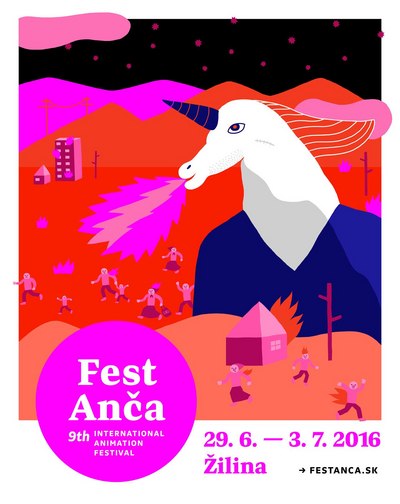 ŽILINA, SLOVAKIA -- In the film world, The Quay Brothers are more than just a name. For good reason last year Hollywood director Christopher Nolan took them on as the subject for his short documentary Quay. Subsequently movie theatres across the US brought out a 70-minute screening of several Quay brothers’ shorts, along with Nolan’s documentary The Quay Brothers – On 35 MM. This one-off creative duo will visit Slovakia and present their work at the Fest Anča International Animation Festival, taking place between June 29 and July 3, 2016 in Žilina, Slovakia.

The art world is home to several sibling creative duos. Yet when it comes to the extraordinary, none is likely to match the twin unit of Stephen and Timothy Quay. Born in Pennsylvania and living in London, the brothers have had a successful 30-year career during which they have drawn inspiration mostly from Central Europe. Motifs can be traced from the work of Franz Kafka and the Polish writer Bruno Schulz, while their films echo the music of Leoš Janáček, Zdeněk Liška and Béla Bartók. Their greatest idol is Jan Švankmajer, to whom they also dedicated The Cabinet of Jan Švankmajer (1984).

“The Quay thumbprint is unmistakable, whether in their own work or in commissioned projects, such as their short animated sequence in the feature film Frida, which, instead of doctors, features stylized skeletons,” says Fest Anča program director Maroš Brojo. “The unique flair for animation also comes through in their book illustrations, music video production and dance movies, as well as set designs for opera, theatre performances and concerts. Stephen and Timothy Quay will join Fest Anča and share stories from the beginnings of a career that has been so notably distinct from other artists’ as well as the trends of contemporary animation.” The films selected from their intuitive and intimate production include The Cabinet of Jan Švankmajer, Street of Crocodiles, Mask, In Absentia and many others.

Another fascinating producer at Fest Anča is Steven Woloshen, who animates directly onto film stock. Seeing him amidst his creative process is therefore a truly remarkable experience. Fest Anča attendees will have the opportunity to see his performance and try drawn-on-film animation during his Scratchatopia workshop. Steven will reveal even more about the camera-less animation technique during his masterclass.

This the 9th Fest Anča will focus on Balkan animation. “We will be screening the latest films as well as several pictures that have resonated in the historical context of animation in particular Balkan countries,” said Maroš Brojo. “Animators can look forward to the attendance of Vanja Andrijevic from Bonobostudio, currently the most successful film studio in Croatia, who will most certainly bring along some films from their production.”

Fest Anča aims to present Slovak festival attendees with the best work by Serbian, Slovenian, Croatian, Romanian as well as Greek film producers. As promised by the program director: “For a brief moment in time, viewers will find themselves amidst interplanetary space in the year 3084 thanks to the first Romanian sci-fi feature film Delta Space Mission directed by Mircea Toia and Călin Cazan.”

As well as competitive sections that showcase the freshest animated work from around the world, attendees can also enjoy several extraordinary films in thematic sections such as World Panorama, Entities and Web series. Another very popular item on the festival agenda is Midnight Screenings featuring horror and extremely bizarre X-rated flicks. The festival organizers are very well aware that picking the weirdest people from around the world would be an unrewarding and useless job; but conversely to select the most bizarre from submitted films most rewarding and instructive!

The late night program will also include screenings from the Extremely Short Section of Extremely Short Films, Contemporary Abstract Animation, as well as films for truly resilient viewers in the Anča in Mordor section. The midnight screenings will also feature films and GIFs by Cyriak Harris, whose work is instantly recognizable. Snatching topics from everyday life, pop culture and museum taxidermy exhibits, he sets them in unexpected situations and contexts, largely resulting in fractal-like structures that are both absurd and spine-chilling.

This year’s festival once again has a brilliant program for young viewers. They can even vote for their favorite films in the International Competition of Films for Children, and watch archive treasures of TV bedtime stories as well as several animated feature films. As well as screenings, kids will also enjoy a workshop and use their practical skills when transforming matchboxes, chocolate boxes and drink cans into pinhole cameras to create pictures on black-and-white photosensitive paper! One of Fest Anča’s partners, TV in the City, will screen several feature animated family films open-air at Andrej Hlinka Square in Žilina. A feature of Fest Anča is its multi-genre approach and the aim to reach beyond its festival venues. So every year an ensemble of artists descends into an underpass armed with paints, brushes, spray cans, ladders and inspiration to add a splash of color with street-art, comic and cartoon murals. Our distinctive musical program is also a strong attraction - including live musical film accompaniment. This year’s screening of Allegro non Troppo will be accompanied by the e-music innovator Jonatán Pastirčák.

This the ninth International Animation Festival Fest Anča will take place at Stanica Žilina-Záriečie Cultural Centre, the enchanting Žilina Puppet Theatre, the New Synagogue, the City Theatre, and with the support of TV in the City at Andrej Hlinka Square.

For more information, check out the festival program at www.festanca.sk/2016/en.