Fantoche Fest Takes off with 2015 Edition 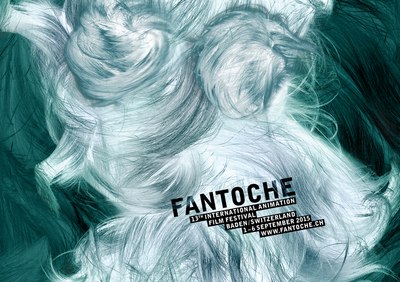 BADEN -- Organizers of Fantoche 2015, the 13th International Animation Film Festival Baden, have announced top-class competitions, Focus Poland and a host of international guests for Switzerland’s largest animated film festival. Running September 1-6 in Baden, the Fantoche Fest kicks off on Tuesday with a spotlight on animated films about adventure and family life.

The International Competition explores the very latest trends in the world of animated images, and presents the most creative, innovative and exciting work in animated short films from around the globe. They span across a wide range of topics -- from the bold, cheerful or engaging, to the emotionally touching and thought provoking. Some are experimental while others hold their own as traditional auteur films; there are outstanding examples of artistic independence or technical innovation studies in abstract visualization, pointed commentaries and impressive blends of ideas and implementation, of content and form. A wide range of genres, narrative strategies and animation techniques are represented as well. Fantoche makes a conscious effort to juxtapose these various concepts, since the festival always seeks to explore the friction between vision and tradition, offering new perspectives into the creative wealth of animated film-making. Here’s a taste of what to expect:

Fantoche is giving the home-grown Swiss animation film industry a platform of its own, and a presence on center stage. Films by Swiss directors are automatically entered into the selection for the Swiss Competition. This puts the Swiss film scene in the spotlight, and at the same time presents it in an international context. Several Swiss directors will also be at Fantoche, including budding masters such as Nils Hedinger and Maja Gehrig or veterans such as Jesus Perez and Georges Schwizgebel.

This year, there are three making-of documentaries lined up for Fantoche, with invitations extended to directors and other major film studio contacts to give the audience insights into how films are made:

At its premiere at the Annecy festival, the film immediately won the Audience Award. Director Rémy Chayé has previously been involved in plenty of award-winning films such as Secret of Kells and The Painting. He will describe some aspects of the production of the first film under his direction.

Martin Senn’s career sounds like a dream come true. Employed by Pixar in Emeryville as a technical artist in the matte painting department, he sits at the juncture of art and technology at a studio where artists and technical staff collaborate shoulder-to-shoulder. Senn gives insight into his work for the already famous “brain freeze” effect in the film Inside Out.

Director Jan Balej had good reasons to adapt Andersen’s fairy tale The Little Mermaid for his film. His chief animator Michael Carrington will explain why, as well as speaking about what fairy tale archetypes have to do with contemporary reality and about his choice of employing stop motion techniques.

In contrast, the Coming Soon presentations will offer an insight into feature film projects that are currently under production: director Franck Van Leeuwen will be presenting his Franco-Swiss coproduction Young Perez; Dominik Wawrzyniak will show his adept juxtaposition of animation with live action in the war drama Another Day of Life and Peter Budinský, who founded one of the very first animation studios in Slovakia in 2013, will offer insights into his latest work, Heart of a Tower.

After a consistently strong showing by films from Poland in Fantoche's International Competition section in recent years, it became clear that a closer look at the Polish animated film scene was needed. Some filmmakers had been able to make a name for themselves before the country’s political transition, thereby paving the way for the new dynamic that has arisen in the past few years. What is especially striking is how Polish films are often about inward or outward journeys.

With the recent wave of refugees seeking safety in Europe, this calls for a different look at the very human fates behind the headlines. The retrospective on Jan January Janczak is also relevant to this subject matter: Janczak had to flee Poland in the 1980s and has been living in Switzerland since. In addition to Janczak, Fantoche 2015 will also be attended by Piotr Szczepanowicz, curator Kacper Zamarlo at the Lodz film school, and Wojtek Wawszczyk, Anna Baszczyk and Dominik Wawrzyniak, the filmmaking team behind Another Day of Life.