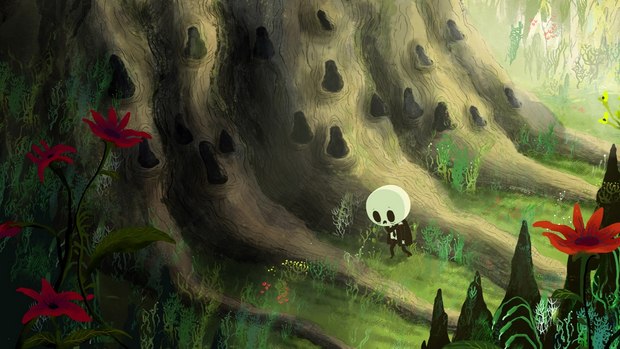 Straight out of Istanbul comes adult animated feature Bad Cat, about the worst pet in the world. A high-energy hellride through the vibrant Turkish cosmopolis, the film is adapted from the graphic novel “Kötu Kedi Şerafettin” by Bülent Üstün.

Chain-smoking, booze-chugging, violent, thieving, foulmouthed sex fiend Shero isn’t the cutest kitty on the block -- those would be the pretty female felines he’s always scheming to have sex with. No, Shero’s a pretty awful cat, passing his days infuriating his owner, stealing fish and liquor, and badmouthing everyone around him. He plans to spend the night that way with his sleazy pal Riza the rat and Rifiki the seagull, but tonight is going to be a bit different. It’s going to include the unexpected arrival of a son he never knew he had -- and harshly rejects. It’ll include the unstoppable zombie of a geek cartoonist hellbent on revenge. It’ll include menacing mutts, a nasty landlady, a bank robbery gone wrong -- and worst of all, true love!

Written and directed by Alain Bidard, and produced by Pagod Films in the flattened 2D CG style popularized by many Japanese anime films, Battledream Chronicle is the very first animated feature from the tiny island of Martinique. At the heart of the action is Syanna, a truly sympathetic and authentic black female protagonist, and Bidard’s imaginary future world is boldly realized, its settings richly evoked, and its action scenes amazingly fluid and dynamic.

In the year 2100, humankind has achieved paradise -- and seen it torn away from them. The digital realm of Farandjun has been usurped by a tyrannical computer virus that pits the nations of the world against each other in a virtual-reality tournament, to select who will reign supreme, and who will be subjugated. The gladiatorial combat of Battledream may be a simulacrum, but its consequences are chillingly real. The villainous nation of Mortemonde is on the cusp of total domination. Only the tiny island of Sablerêve remains to be crushed. The last hope for liberty is a young woman named Syanna, whose true nature remains a secret even to her. The odds against Syanna and her Battledream team seem insurmountable, but the heroes will not back down. Syanna will confront the fiercest fighters of Mortemonde, to kill the masters inside them -- and the slave inside herself. A haunting meditation on the battle between liberty and security, Harmony is the second part of a trilogy of anime features adapting works by science fiction writer Project Itoh (Satoshi Ito), and is directed by Takashi Nakamura with an assist from Michael Arias (Tekkon Kinkreet).

Tuan has fled to the ends of the Earth. She’s serving as a cease-fire observer in sub-Saharan Africa, the ragged margin of human civilization drastically reduced by cataclysm -- and since supremely elevated by nanotech miracles. Here, rules can be bent, and firepower is still an accepted negotiating tool. Tuan can run -- but she can’t hide. She’s hounded by shame and regret over a failed teenage suicide pact in her homeland Japan, and by gnawing doubts regarding the apparently perfect fusion of medicine, technology and governance now guiding every aspect of (almost) every human life. Unexpected events will exacerbate her apprehensions -- and bring forth troubling memories. Presumed lost (or destroyed by U.S. Occupation forces) until the mid-’80s, Momotaro is the first feature-length animated film produced in Japan. Now freshly restored by Shochiku in a 4K scan of the original 35mm negatives, Seo’s classic lives again. The restored film had its world premiere in the prestigious Cannes Classics section at the 2016 edition of the festival, and was picked up for North American distribution by Funimation.

Once upon a time, a monkey, a dog, a pheasant and a bear joined the Navy! Back from their adventures, the jungle’s many animals flocked to hear them recount their exploits, and thus began the tale of MOMOTARO, SACRED SAILORS -- Japan’s very first anime feature! When tasked by the Ministry of Navy to produce a propaganda film for children, animation pioneer Mitsuyo Seo turned to Disney’s FANTASIA and the Japanese legend of the peach-boy Momotaro for inspiration. Expanding on his 1943 37-minute retelling of Pearl Harbor, Seo delivered MOMOTARO, SACRED SAILORS, a landmark propaganda film offering a very loose retelling of the Pacific War by way of anthropomorphic animal sing-song, kawaii hyper-violence, gorgeous cell animation and many more surprises, including unauthorized cameos by the likes of Popeye bringing shame to the West! It’s bio-warrior beast-man versus wasteland warlock in this totally hand-drawn, homemade, kitchen-table cartoon mini-masterpiece that shamelessly wallows in vintage Saturday-morning science-fantasy fun. With all-vocal sound effects and a score that’s strictly thrift-shop synthesizer, Nova Seed is the ne plus ultra of do-it-yourself animation. Entirely the work Canadian-born, Japan-based Nick DiLiberto, the film comprises some 60,000 drawings created over a period of over four years.

The world is threatened by the diabolical Dr. Mindskull, and the powers that be plan to confront him with a ferocious champion. Plucked from a bloody gladiatorial arena, the lion-man Nac (“Neo Animal Combatant”) is cuffed and pressed into service. Brought deep into the desert, Nac escapes his captors with the prize everyone wants in his clutches. But what, or who, is it? Meanwhile, a merciless bounty hunter is stalking Nac -- deep into Dargon Territory! Spanish comic artist, animator and illustrator Alberto Vázquez first transposed the world of his graphic novel “Psiconautas” to the screen with the 2010 short film Birdboy, which was co-directed with animator Pedro Rivero. A disturbing mélange of whimsy and wickedness, Birdboy found a nest at countless film festivals and won dozens of awards, notably the Goya Best Animated Short Film prize in 2012. Psychonauts, The Forgotten Children expands and enriches the simple yet surrealist world of Birdboy.

Life on the island, or what’s left of it, hasn’t been the same since the great accident. Deeply alienated from her mother and stepfather, teenaged Dinky desires nothing more than to join her friends and escape the darkness, drudgery and subtle sense of menace that pervades the once-lively lump of rock in the sea. But she doesn’t want to leave without the elusive Birdboy. Despised by the villagers and hunted by the police, the silent, drug-addicted outcast hides deep in the woods, secretly continuing the mysterious task of his murdered father. The rumour is that he’s possessed by demons, and the drugs he takes do little to keep them at bay. In fact they seem to draw the monsters to him… From director and screenwriter Yeon Sang-ho, Seoul Station is a zombie movie that aims to address the wrongs of social inequality with an aesthetically emotional animation style paired with a dark view of human nature.

Every night, packs of homeless people flock to Seoul's central subway station in search of a place to sleep. One of them, however, seems in worse shape than usual tonight. Noticing nasty bite marks on his neck, his friend’s search for help yields nothing but hateful remarks. Meanwhile, young Hae-sun leaves her boyfriend Ki-woong’s place after he tries to force her into prostitution. Completely beside herself and too ashamed to contact her dad, she heads to Seoul station to spend the night. As she’s carefully exploring the station’s corridors, she’s rushed by a rabble of enraged hobos attacking anything that get in its way. With the help of an old man, Hae-sun barely manages to escape, igniting a relentless chase through this chaotic living-dead invasion, during which Ki-woong and Suk-gyu, her dad, search for her all over the infested city. Such a horrific night gives a whole new twist to the word “homeless,” and in times of crisis, a living human can prove more threatening than a horde of zombies.