The prolific author of more than 30 books, including must-haves ‘Cartoons: One Hundred Years of Cinema Animation’ and the three-volume ‘Animation – A World History’ passed away on Monday, December 13. 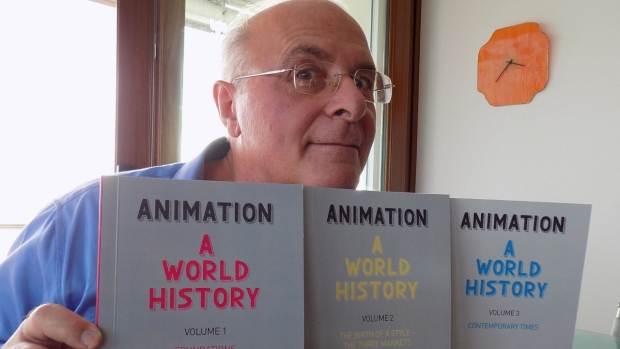 With the passing of Giannalberto Bendazzi on December 13, 2021, at the age of 75, the animation world has lost our beloved historian and the world has lost a gentle man who loved life and lived it to the fullest. The author of numerous books and articles, he is best known as the author of Cartoons: One Hundred Years of Cinema Animation and the three-volume encyclopedic Animation – A World History. Both of these titles are a must on any animator’s shelf.

Born in Ravenna Italy on 17 July 1946, Giannalberto studied law at the University of Milan before moving to Genova Italy. At the age of 21 he became the youngest Italian daily film critic but soon became dissatisfied with journalism and turned to essays and books on animation and live action film. In the mid 1980’s he decided to concentrate completely on the study of animation. He is the author of over 30 books in various areas of animation as well as numerous essays. (You can find his numerous articles for AWN here.) His studies led him to becoming the foremost authority on animation in non-western countries such as Latin and South America and the Caribbean. In 1983 he published Due volte l’oceano – Vita di Quirino Cristiani, pioniere del cinema d’ animazione (English title Twice the First – The Life of Quirino Cristiani, Pioneer of Animation). Reprinted in Spanish in 2008, the book was finally published in English in 2017. It details the life of the Italian born Argentine animation director, Quirino Cristiani, who made the world’s first two animated feature films, El Apóstol which premiered in 1917 and Leaving No Trace (1918). A firm believer that to understand one art form you must appreciate others, he also authored books on Mel Brooks and Woody Allen.

He was a founding member of the Society for Animation Studies, an international organization dedicated to the study of animation history and theory that began in 1987. In 2002 Giannalberto received the Award for Outstanding Achievement in Animation Theory from the Zagreb Animation Festival. ASIFA (Association international du Film d’animation) awarded him the Lifetime Achievement Award which I had the honor to present to him in 2016. He also received an Honorary Doctorate from the Portuguese ULHT - Universidade Lusófona de Humanidades e Tecnologias during the XXXI Conference of the Society for Animation Studies in 2019.

One of the things that endeared Giannalberto to so many people was that he was never too busy to share his vast knowledge, listen to an animator talk about a new project, or give advice. I will miss being able to email him to check a fact or ask about something that I can’t remember.

Far from being a dry academic, Giannalberto had a wickedly funny sense of humor and an impish twinkle in his eye. He loved to laugh and was wonderful company. I join his family and many friends around the world to mourn his passing. I will miss his smile, his wit, and his wonderful hugs. I like to think of you sitting up there smiling down on all the animators, young and old, that you have helped throughout your long career. Rest in peace my friend.

Editor’s Note: The animation community has lost a humble, gentle soul, passionate about everything animated, always pushing to bring attention to artists largely unknown in the West that without his voice, and pen, of admiration, might remain a mere footnote in history. Giannalberto was one of the nicest people I’ve met on my journey through the world of animation, and his wit, knowledge, and friendship, will be missed.