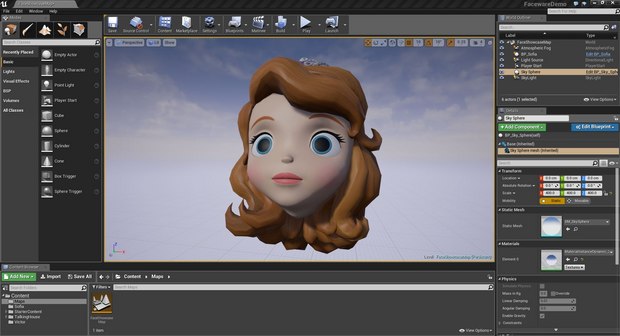 LOS ANGELES, CA --  Faceware Technologies, the leading provider of markerless 3D facial motion capture solutions, announced the launch of the Faceware Live plugin for Epic Games Unreal Engine 4. The new integration will enable UE4 developers to capture facial movements with any camera and instantly apply those movements to characters in the Unreal Engine.

“Faceware Technologies has a long history of creating some of the most iconic and realistic faces in games and films,” said Peter Busch, vice president of business development at Faceware Technologies, “while Epic’s Unreal Engine is known for helping create some of the best-selling games ever. Integrating our real-time technology with their premier game engine was just a natural fit.” The new Faceware Live plugin works like this: Unreal Engine users capture an actor’s facial movements using any video source, such as an onboard computer video or webcam, the Faceware Pro HD Headcam System, or any other video capture device. That captured movement data is then streamed instantly into the Unreal Engine to drive a character’s facial animation in real time.  The facial movements display in real time via the Unreal Persona animation system. “The ability to combine the power of the real-time performance capture pipeline of Faceware Live, and the power and flexibility of Unreal Engine 4, gives developers an incredibly powerful tool,” said Norman Wang, the director of development at Opaque Multimedia. “Developers will be delighted to see how easily they can access the data from the Faceware plugin through the native Blueprint interface.”

Several unannounced projects that utilize the plugin will debut later this year.