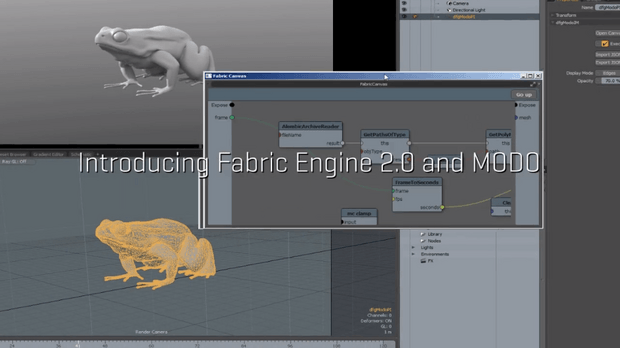 MONTREAL -- Fabric Software announced that it is working with The Foundry to integrate the Fabric Engine development framework with MODO, a complete 3D content creation solution for design exploration, game creation and media production. The first public demonstrations of Fabric Engine for MODO will take place at FMX2015 this week.

Fabric Engine is a digital content creation platform that enables anyone to build powerful tools and applications for visual effects, games, virtual reality and visualization. Fabric encapsulates tools and data, allowing both to be moved freely between popular applications like Autodesk Maya, Autodesk Softimage, and now The Foundry’s MODO.

“Customers have been asking us to integrate Fabric Engine with MODO because MODO is becoming increasingly important in their pipeline,” said Fabric Software chief executive Paul Doyle. “Modern pipelines use a range of applications, and Fabric can serve as the glue between them. We love what we’ve seen of MODO 901 and look forward to continuing collaborating with The Foundry on making production as painless as possible.”

“We are thrilled with the Fabric Engine and MODO collaboration,” said Shane Griffith, MODO product marketing manager at The Foundry. “We share the same goal of providing design, game and media clients alike with the best tools to build flexible and powerful pipelines.”

Fabric Engine for MODO will enable developers of all levels -- from artist to hardcore R&D developer – to leverage Fabric’s powerful framework within MODO to create even more tools for authoring high-quality content. The software is expected to be available for public download in the SIGGRAPH timeframe.

Fabric Engine for MODO at FMX 2015

Fabric Engine will be hosting a daily workshop at 10:00 Tuesday to Friday in Raum Karlsruhe. Fabric Software co-founder and chief executive Paul Doyle and software engineer Helge Matthee will demonstrate Fabric Engine for MODO, as well as Fabric Engine 2.0 and the Fabric Canvas visual programming interface.

For more information about Fabric at FMX2015, visit the Fabric Software blog.