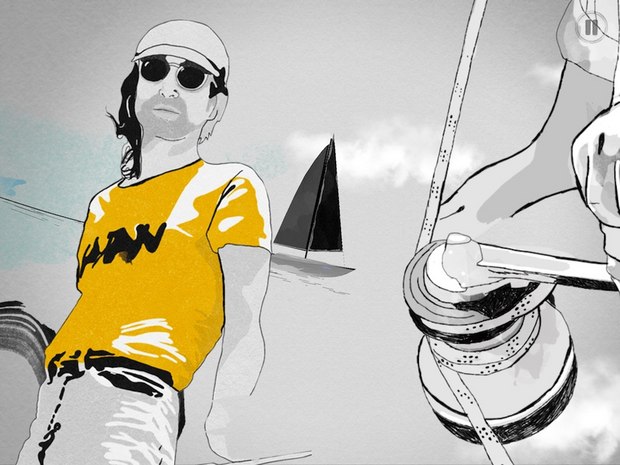 The app, created for iPhone, iPad and iPod touch, is now available exclusively on the App Store. Net proceeds from the sales of the app will support WhyHunger and its Imagine There’s No Hunger campaign. It is currently the #1 app in Music for the iPad.

John Lennon: The Bermuda Tapes pushes the boundaries of the emerging album app market through innovative gameplay and documentary storytelling. Featuring rare and previously unreleased demos, interviews, photographs and other interactive features, the app immerses fans in the story of Lennon's legendary Bermuda voyage that rejuvenated him creatively six months prior to his passing.

The app's first path, “play,” lets users guide the vessel on which Lennon and his crew mates weathered a mid-Atlantic storm singing sea chanties, as well as visit the Forty Thieves Disco where Lennon first heard the B-52’s “Rock Lobster" – the song that convinced him that audiences were ready for his musical collaboration with wife and artistic collaborator Yoko Ono and, ultimately, the Double Fantasy album. In its most compelling moment, fans can create beautiful, interactive illustrations of John and Yoko as they listen to sound bytes of the iconic couple's collaborative songwriting dialogue.

Discussing this portion of the app and Double Fantasy, Yoko Ono said, "I think the album app captures the sense of discovery and the artistic dialogue that John and I shared at that time and provides a new way to help us imagine a world without hunger.”

The second path is the “listen” side, which includes an exclusive never-before-heard mix of “I’m Losing You” weaving together different demo and studio versions of the classic song, as well as intimate demo tapes of other songs recorded in Bermuda including “Woman,” “Starting Over,” “(Just Like) Starting Over,” “Nobody Told Me,” and “Dear Yoko.” Lennon sang each new song over the phone to Yoko Ono, who remained in New York. Ono was in turn inspired to write her own set of remarkable songs, “Kiss, Kiss, Kiss,” “Moving On,” and “Hard Times are Over,” among them.

eyeball edited together excerpts of the recordings to give fans a remarkable window into Lennon's songwriting process. These demo tapes are complemented by visual materials provided by Yoko Ono, including John’s original hand-written lyric sheets. Additionally, fans can enjoy newly discovered photographs of John aboard the Megan Jaye.

In response to the challenge of representing such iconic figures as John Lennon and Yoko Ono, eyeball sought to devise an artistic direction that would be both recognizable and compellingly new. In collaboration with Yoko Ono, award-winning filmmaker Michael Epstein and digital artist Mark Thompson (app co-directors), interactive media studio Design I/O (creative direction, interaction and programming) and WhyHunger (app owner), eyeball worked diligently for over a year to balance design, interactivity, and a forward-moving narrative within a single app.

“We always love when we’re able to apply all of our in-house talent and capabilities to innovative new media,” says Ben Spivak, eyeball Managing Director. “It was an exceptional collaboration with the directors Michael [Epstein] and Mark [Thompson] retelling this pivotal moment in John's life in an immersive and meaningful way. Even more rewarding was the fact that we were doing this to help WhyHunger combat the root causes of hunger and poverty in our world. We’re really proud of how it all came together."