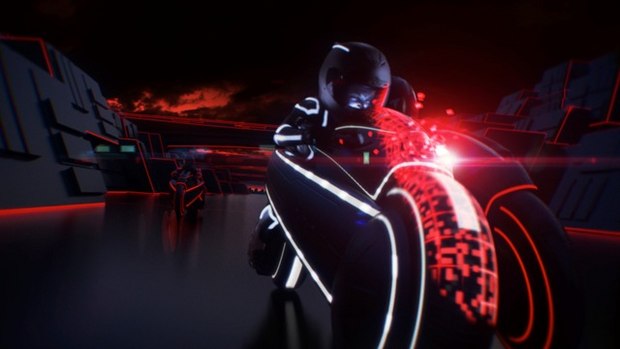 Underscoring each program with a fresh and modern twist, eyeball sampled iconography of popular music and culture spanning 30 years. Combining live-action, design and CG, they delivered six unique mixed-media show opens, as well as bumpers, backgrounds, and key-able logo animations for each title.

The show opens feature an array of environments, styles and cultural references unique to familiar music genres and decades – even combining retro and modern influences for effect. For instance, the gritty “The ‘90s Rocked” open focuses on silhouettes reminiscent of two very different cheerleaders who kicked off the decade’s “teen spirit;” and “Rock Bloc” emanates a cubic light installation composed of concert rafters and drum hardware, which cleverly flickers shapes and words. “Jim [Fitzgerald] and Rob [Grobengieser] both have a very deep understanding of the VH1 Classic brand and they both brought a ton of music and cultural references to the table,” remarks eyeball Creative Director Jesse McGowan. “The project challenged us to find a common thread between many different eras while working within VH1’s red, black and white color palette.”

The show open visuals all seamlessly segue into the typography and logo animations of each title. From the ‘90s blocky college font that resolves over a red and black flannel to the Tron-inspired ‘80s open, which concludes with a juxtaposition of retro-digital and heavy metal type-sets. All of the opens feature original music produced in collaboration with music production company Mutata Muzika (Mark Mothersbaugh of Devo). From electronica to an all-out double-bass metal assault (and every rock genre in between), the music seamlessly interplays with the visuals and sound design.

“Creating something nostalgic yet modern was a fun challenge for our team,” says Mothersbaugh. “Finding the right style for each block, we wanted to stay true to the genre but add a flare of modernity to it. Once we landed on an idea, eyeball’s creative team was incredibly easy to work with. They knew our language as musicians and were very open to different interpretations within each genre, which allowed us to experiment and take ideas to more directions than normal.” “It was an exciting opportunity to reunite and collaborate with Mark and his team,” says David Edelstein, eyeball Managing Director, who previously worked with the company on other projects. “Marrying our visuals to his music was pretty amazing and it made the whole project feel exceptionally authentic.”

The three-month production process involved elaborate VFX, costumes and specially constructed sets. eyeball shot most of the live-action on the Red Epic against both simple practical backgrounds and custom green-screen.