eyeball partners with The Buntin Group to create a new CG-intense campaign for SERVPRO. Creative strategic design agency eyeball recently reunited with SERVPRO agency of record The Buntin Group to create a new campaign that expands on the image of the water and fire damage restoration service provider with photo-real CG animation, as well as practical visual effects.

Contemporary yet artistic, the spots are a noteworthy departure from typical industrial-themed advertising and marketing media. Working closely with The Buntin Group, eyeball conceived the spots with an emphasis on what distinguishes the SERVPRO brand, from its diverse vehicle fleet to mobile connectivity to locations nationwide.

“Scale” and “Faster” reveal how SERVPRO is capable of any job, as a utility van on a desert highway transforms into a mid-sized moving truck and then a freight truck. “Ready” highlights the company app with graphic overlays that pop up to assess damage from an office flood. Lastly, “Here to Help” brilliantly transforms a living room into a SERVPRO warehouse. 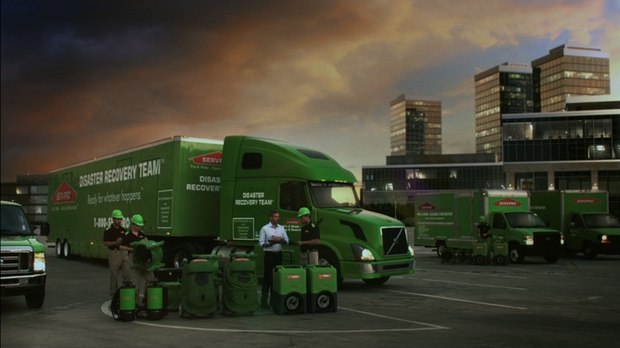 “This is the second SERVPRO campaign we have done with eyeball,” says Tom Gibney, SVP/Director of Content Production for The Buntin Group. “After the excellent results on the first job, we knew we wanted to go back to them again. [eyeball director] Amilcar Gomes’ creative vision combined with his collaborative directorial style made for a great experience – he and the entire eyeball team were such a pleasure to work with. The final product exceeded our expectations, and the client was so pleased with the outcome.”

“While CG is an intricate process, it gave us more control and allowed us to take the spots to a whole new level, conceptually and visually,” adds Gomes. “We also incorporated practically animated elements, such as moving walls and ceilings in order to achieve the level of tangible reality the client was looking for.” Because the spots were VFX-heavy, it was crucial for eyeball to keep both the timeline and budget on track. This included sticking to the approved previs and utilizing their resources as much as possible while shooting the living room for “Here to Help” and the water elements for “Ready,” both of which were shot over the course of two days at a Los Angeles studio. According to Gomes, mixing the CG with practical shots was integral to creating a level of realism for environments seen in the vehicle spot, which was shot on the road on the 3rd day. And for “Scale,” eyeball even employed a drone for an overhead shot, which enabled its artists to render a 3D landscape with a 3D camera move to create the illusion of a helicopter shot, which was then matched seamlessly into the running footage shot with a traditional Russian arm.

“The Buntin Group was open to our ideas, and through an iterative and collaborative process, they empowered us to come up with a slightly different approach than originally envisioned,” concludes Gomes. “They gave us tremendous encouragement to help push their client into new visual territory, which is always creatively rewarding for us.”