Embark on a new adventure with a little spider, a forest spirit, an ancient magus, and more with The Loot Company’s Crunchyroll crate. 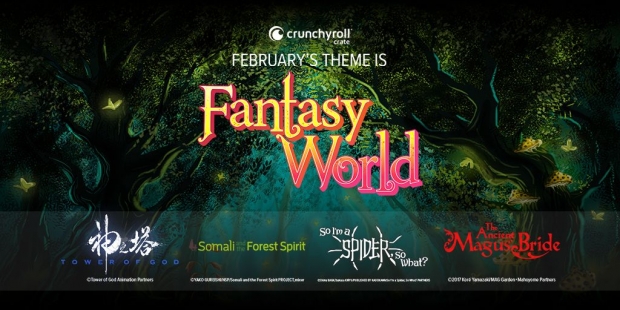 Who’s ready for an anime adventure? Explore a “Fantasy World” this February with The Loot Company’s Crunchyroll crate, and stamp your passport with beloved titles like So I’m a Spider, So What?, Tower of God, Somali and the Forest Spirit, and The Ancient Magus’ Bride. There may also be a special appearance from Crunchyroll’s beloved princess, Crunchyroll-Hime!

Get acquainted with some of the titles featured in February’s crate:

In So I’m a Spider, So What, a regular high school girl wakes up and discovers she’s been reborn as an itsy-bitsy, yet perpetually positive, spider.

Tower of God follows the journey of Bam as he battles his way through the mysterious Tower, facing unimaginable terrors, as he strives to find the only friend he’s ever known.

Somali and the Forest Spirit is the story of a world ruled by inhuman beings, who persecuted humans and drove them to near-extinction. One day, the forest guardian Golem meets a human girl, which begins a journey that binds them as father and daughter.

In The Ancient Magus’ Bride, Hatori Chise has lived a life full of neglect and abuse, but when a man with the head of a beast, wielding strange powers, obtains her through a slave auction, Chise is freed from the bonds of captivity. The magus then makes a bold statement: Chise will become his apprentice--and his bride!

The February Crunchyroll crate “Fantasy World” is filled with exclusive items and gear you can only find from Loot Crate. Gear up with this awesome assortment of Crunchyroll items by February 15 at 9:00pm PST and get your hands on the new theme at 9:00pm PST tonight, January 15th. Crunchyroll crates start at $28.95 plus shipping and handling. Supplies are limited, so get yours before it sells out!