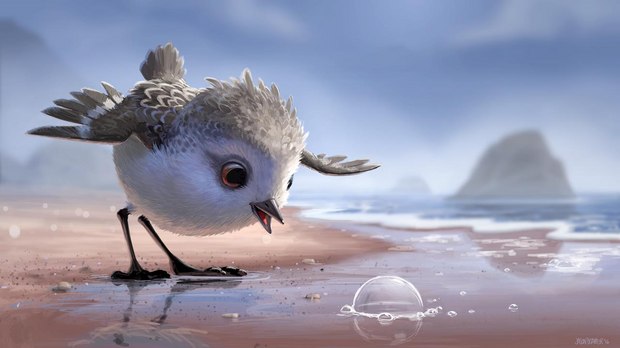 Meet Piper, the world’s most adorable Sanderling, in concept form! Piper as an Audubon-style print.

Produced by Marc Sondheimer and directed by Alan Barillaro, the supervising animator on Pixar features WALL•E and Brave, Piper played in theaters this summer ahead of Andrew Stanton’s Finding Dory, burrowing into our hearts as she learned to burrow her tiny digital head into the sand.

An allegory about the way children learn from their parents and from other children, Piper is a story about conquering and overcoming one’s personal fears. The six-minute stylized photorealistic short follows hungry hatchling Piper, who must overcome her fear of the water in order to eat.

The project, which took more than three years to complete, began as a series of tests conducted to create more painterly CG animation tools. Inspired by watching endless cycles of birds fleeing the waves and then returning to the water to eat, Barillaro showed his animation tests to Stanton, who told him to keep working on it.

With a score composed by legendary guitar talent Adrian Belew, Piper was first introduced at Annecy, then showcased at Ottawa, Italy’s VIEW Conference, and the 2016 SIGGRAPH Computer Animation Festival. It has been nominated for an Annie Award for best animated short, and is currently one of 10 film shortlisted for a nomination for the 89th Academy Awards.

Courtesy of Pixar, here is a collection of concept art from Piper along with stills from the finished film: