Hitting Netflix September 1, the next chapter in Mattel’s storied franchise finds Barbie embarking on a musical summer adventure in the Big Apple, where she meets her new best friend, Barbie! 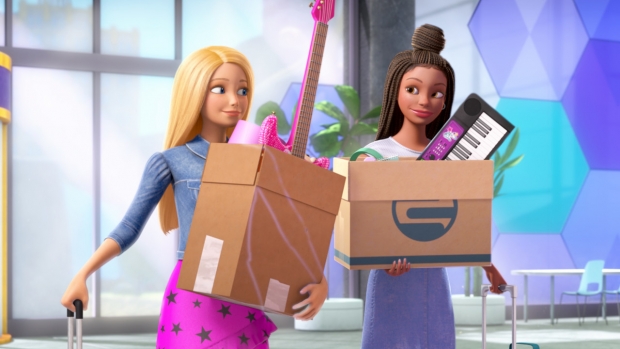 Mattel has announced the next animated chapter in their storied Barbie movie franchise, Barbie: Big City, Big Dreams, will premiere September 1 on Netflix in the U.S., with global streaming and linear television partners to be announced later. They’ve also shared with AWN an exclusive look at the new official music video, “Before Us,” from the film. Barbie: Big City, Big Dreams follows the success of this spring’s Barbie & Chelsea The Lost Birthday and last year’s musical Barbie Princess Adventure.

This new 3D animated musical adventure follows Barbie Roberts as she says goodbye to the familiar beaches of Malibu and says hello to the hustle and bustle of New York City’s Times Square. After enrolling in a prestigious and highly competitive summer program at the Handler School for Performing Arts, upon arrival, she meets a fellow student named… Barbie Roberts! That’s right; Barbie meets Barbie and, while they have much more in common than just their names – like their shared dream of making it on Broadway – the two girls really bond over their complementary differences. As the two Barbies compete for the program’s coveted, once-in-a-lifetime Spotlight Solo, the new friends discover that competition isn't only about winning: it's about striving to be your best while bringing out the best in your competitors.

Sing along on “Before Us” with Barbie "Malibu" Roberts and Barbie "Brooklyn" Roberts:

Joining the two Barbies on their big adventure are: Animation services are being provided by Mainframe Studios.