Exclusive: Phil Gerus’ ‘Shake Off the Jinx with Your Kiss’ Music Video

Animated by JJ the Icon and debuting today along with the DJ/jazz pianist’s new ‘Too Close to Love’ EP, 2D short envisions a tender dialogue between a woman and nature as they eventually become one. 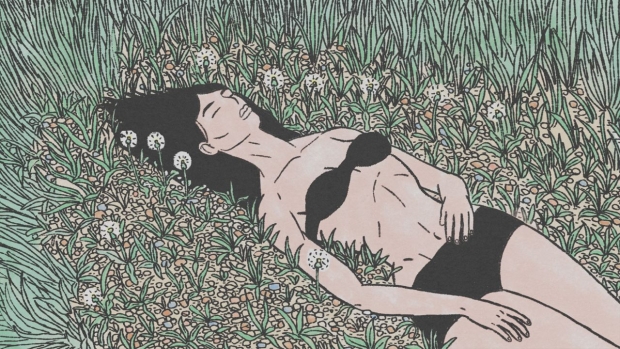 Debuting today exclusively on AWN is the official music video for Phil Gerus’ “Shake Off the Jinx with Your Kiss,” one of six tracks on that artist’s new Too Close to Love EP. A music producer/DJ and jazz pianist from Moscow, Gerus fuses cassette pop, disco, soul, R&B, and funk into his emotive sound. A classical pianist by training, Gerus nevertheless was heavily influenced by his parents’ music tastes, including the works of jazz greats such as Oscar Peterson, Bill Evans, and Keith Jarrett. He has performed around the world at leading clubs like Dommune (Japan), Studio 80 (Amsterdam), Mojo Club (Hamburg), Sameheads (Berlin) and various hotspots in Europe and Russia.

Too Close to Love was recorded in both Tokyo and Moscow in 2014, originally planned as a continuation of Gerus’ Opposites Left Together 10-inch record, released on George Fitzgerald's ManMakeMusic label. The artist notes that “although it took about seven years now, it feels more appropriate than ever to finally put this out.”

The 2D animated short was created by JJ The Icon, an artist and animator also from Moscow. Take a moment to enjoy:

According to JJ, “This music video is by far the biggest project I’ve ever worked on, considering it’s a 3-minute-long animation done by one person.” Inspired by the feeling of intimacy and tenderness he felt while listening to the track, the animator says, “I wanted to express those feelings through the dialogue between the main character and nature, as if she’s fully immersed into it and they eventually become one.”

“I focused a lot on the backgrounds, making them as detailed as possible, so every frame could exist by itself and look good,” he adds. “The animation is meant to look a little bit rough, so that it feels analog and lively at the same time. I didn’t want it to look ‘commercial’ on purpose, so using dim colors was a creative choice. I feel like it looks more sophisticated this way. The video is supposed to remind you of children’s books or illustrations by Aubrey Beardsley.”