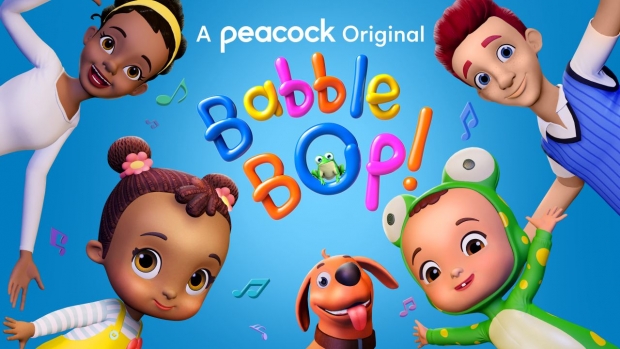 Peacock has just shared with AWN and exclusive look at the trailer and key art for their new preschool series, Babble Bop! The musical jamboree, a one-of-a-kind, diverse series debuts Thursday, December 23.

The show features a foot-tapping, hand-clapping, baby-bottom wiggling, sing-along world of music, dance and preschool play. With a mix of new takes on classic nursery rhymes and original songs, this inclusive short-form series is intended for social and emotional learning for the pre-K set.

With music at the heart of Babble Bop! each episode is constructed around a simple and danceable preschool song, either original or a new take on a beloved nursery rhyme or traditional song.

The series holds up a magnifying glass to the little things in the featured characters’ lives: having a snack, dressing up, drawing with crayons, watching the clouds, or playfully helping their parents (who are always around if not on camera) as best they can. The Boppers love nothing more than to help out!

The characters are quite young so their world is small. Heroes Lily, Hugo, Miguel, Izzie and Sam will play the day away movin’ and boppin’ and havin’ a ball to awesome, catchy, repeatable - and sometimes very familiar – songs.

Produced by Dark Slope Studios, the series is executive produced by Dan Fill and Raja Khanna, and produced by Christine Thompson. Written by Katherine Standford, the show is directed by Luke Jurevicius and Tim D.P. Thompson.