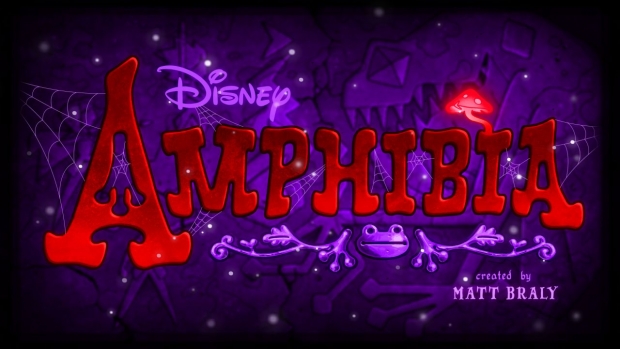 Just in time for the upcoming candy-gorgeathon known as Halloween, Disney Channel has shared with AWN this exclusive Halloween Theme Song from their upcoming Amphibia extended Halloween-themed “The Shut-in” episode, which premieres Saturday, October 17 at 8:30pm PT.

In “The Shut-in,” Anne and the Plantars protect themselves from the dangers of the annual Blue Moon by locking themselves in the house and entertaining each other with the scariest stories they can think of. None other than Mr. Sulu himself, George Takei, from the original Star Trek series, guest stars as Mr. Littlepot.

Prepare to dance to the Amphibia-beat!

Amphibia, recently picked up for its third season, is a frog-out-of-water comedy series that chronicles the adventures of independent and fearless teen Anne Boonchuy after she is magically transported to a rural marshland full of frog people and meets the excitable young frog Sprig Plantar and his family.  Created and executive-produced by Annie Award-winner Matt Braly (Gravity Falls), the series is inspired by his heritage, family and childhood trips to Bangkok, Thailand.

In Amphibia Season 2, Anne and the Plantars are on a quest to unlock the mysteries of the music box as they leave the cozy confines of Wartwood for the distant city of Newtopia. On their journey, they will visit exotic new locations, uncover hidden secrets and experience unexpected reunions as they continue to search for a way to get Anne home.

The cast includes Disney Channel star, Brenda Song (Dollface) as independent and fearless teen Anne Boonchuy; Justin Felbinger (Disney Junior's Miles From Tomorrowland) as Sprig Plantar, who forges a once-in-a-lifetime friendship with Anne; Amanda Leighton (This Is Us) as unpredictable pollywog (aka tadpole) Polly Plantar, the youngest member of the Plantar family; and Disney legend Bill Farmer (the voice of Goofy) as overprotective and traditional grandfather Hop Pop. Amphibia is a production of Disney Television Animation and carries a TV-Y7 parental guideline.