Barbie’s youngest sister Chelsea and her friends jam away in CG video of lead track from the new film, launching this Friday on Netflix. 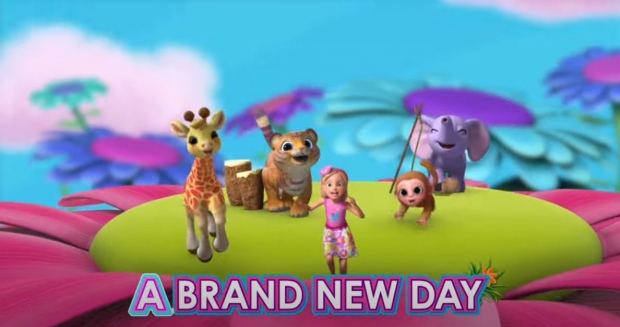 In support of Netflix’s April 16 premiere of a brand-new 60-minute CG TV movie special, Barbie & Chelsea The Lost Birthday, Mattel Television has shared with AWN a fun new music video for the film’s lead track, "Make a New Day." Barbie & Chelsea The Lost Birthday & More!, an album featuring songs from the film as well as other previously unreleased tracks sung by both Barbie and Chelsea, will also debut across digital streaming platforms this Friday.

Directed by Cassi Simonds (Barbie Dreamhouse Adventures), Barbie & Chelsea The Lost Birthday is the first Mattel Television release to feature Barbie’s youngest sister in a starring role. It tells the story of Chelsea and the rest of the Roberts family as they set sail on an adventure cruise for her seventh birthday. When they cross the International Date Line, Chelsea discovers her actual birthday has been lost and she embarks on a fantastical journey through an enchanted jungle island to save it.

Get ready to jam away!

“Barbie’s brand message, about inspiring the limitless potential in every child, and her stories resonate deeply with both kids and parents all over the world,” commented Mattel Television executive producer Adam Bonnett. “This year, we are expanding the Barbie content universe in a number of ways, starting with a fantastical story centered around Barbie’s little sister, Chelsea, an incredibly popular character in the Barbie family. We have barely scratched the surface of the stories the brand can tell, and this is the first of many scripted and unscripted Barbie projects we have in production and development.”

The special will be available on Netflix in the U.S. as well as on Cartoonito (Italy); Pop (UK); 9Go! (Australia); Neox Kids; (Spain); SuperRTL (Germany); Carousel (Russia); and iQIYI (China). Additional broadcast and streaming partners to be announced.

Executive producers for Barbie & Chelsea The Lost Birthday include Bonnett, Mattel Television SVP and GM Fred Soulie, and Mattel Television SVP Content Development and Production, Christopher Keenan. Ann Austen will co-executive produce. The special is written by Austen and Nate Federman from a story by Charlotte Fullerton. The animation was produced by Mainframe Studios.